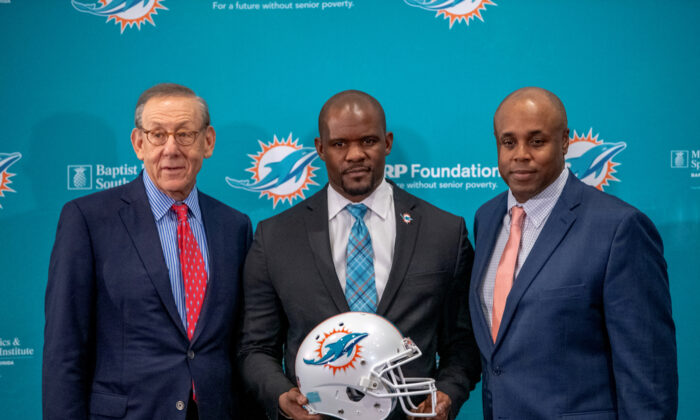 In a memo to all franchises in the NFL Saturday morning, commissioner Roger Goodell sent to all 32 teams stating “we must acknowledge” that the results of the NFL’s efforts to promote diversity toward head coaches “have been unacceptable.” The move was in response to the lawsuit against the Miami Dolphins and the NFL, by former Miami head coach Brian Flores. The memo, titled “Our Commitment to Diversity, Equity, and Inclusion,” is included in full at the bottom of this article.

“For too many years, the NFL has hidden behind the cover of foundations that were supposed to protect the rights of Black players and coaches, all while letting systemic racial bias fester in its front offices,” Wigdor and Elefterakis said. “The NFL is now rolling out the same playbook yet again and that is precisely why this lawsuit was filed.”

Flores detailed on ESPN that Ross was “mad” when the team won games late in the season.

It was the first time since 1997–2003 that the Dolphins had consecutive winning seasons, however, Flores was still fired.

The Dolphins began the 2021 season defeating the Patriots in their first game, but lost the next seven games, before winning seven games consecutively.

Miami split the final two games, including a second victory over New England to end the season just out of the playoffs.

Flores will likely be blackballed for any further head coaching jobs in the NFL, but stated that “we need change.”

Flores is willing to sacrifice his career because “the numbers speak for themselves.” There’s currently one black head coach, while the league has approximately 70 percent black players.

A source from the NFL told ESPN that the accusations of discrimination in hiring practices had no merit.

However, the league will investigate the allegations that dolphins owner Ross offered Flores money to lose games, as well as other potential rules violations.

Elway, Denver Broncos President of Football Operations, responded Thursday to an allegation from Flores that Elway showed up an hour late to an interview with Flores looking “disheveled and like he had been drinking heavily the night before.”

Elway released a statement: “While I was not planning to respond publicly to the false and defamatory claims by Brian Flores, I could not be silent any longer with my character, integrity, and professionalism, being attacked. I took coach Flores very seriously as a candidate for a head coaching position in 2019 and enjoyed our three and a half hour interview with it. Along with the rest of our group I was prepared ready and fully engaged during the entire interview as Brian shared his experience and vision for our team.”

“I want to address a subject that many of us have discussed together, not only this week, but consistently for many years,” Goodell said in the memo obtained by NFL Network’s Tom Pelissero. “Racism and any form of discrimination is contrary to the NFL’s values. We have made significant efforts to promote diversity and adopted numerous policies and programs which have produced positive change in many areas, however we must acknowledge that particularly with respect to head coaches the results have been unacceptable. We will reevaluate and examine all policies, guidelines and initiatives relating to diversity, equity and inclusion, including as they relate to gender. We are retaining outside experts to assist in this review and will also solicit input from current and former players and coaches, advocates and other authorities in this area. Our goal is simple: make our efforts and those of the clubs more effective so that real and tangible results will be achieved.

“We understand the concerns expressed by Coach Flores and others this week. While the legal process moves forward, we will not wait to reassess and modify our strategies to ensure that they are consistent with our values and longstanding commitment to diversity, equity and inclusion. In particular, we recognize the need to understand the lived experiences of diverse members of the NFL family to ensure that everyone has access to opportunity and is treated with respect and dignity.”