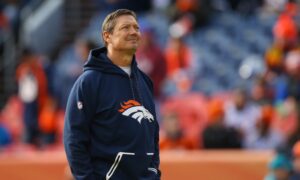 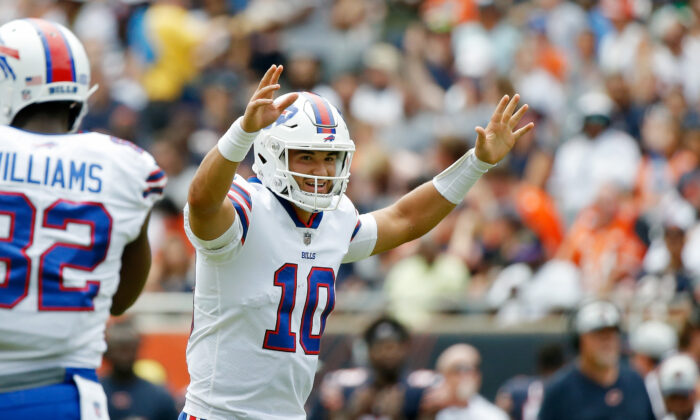 Mitchell Trubisky torched his former team by throwing for 221 yards and a touchdown to lead the visiting Buffalo Bills to a 41-15 victory over the Chicago Bears on Saturday in a preseason game.

Trubisky completed 20 of 28 passes while receiving a mix of boos and cheers from the fans at Soldier Field. He was selected by the Bears with the second overall pick of the 2017 NFL Draft, but the team declined to pick up his fifth-year option.

Trubisky is expected to back up Pro Bowl quarterback Josh Allen this season. Allen sat out Saturday’s contest.

Chicago’s Andy Dalton completed 11 of 17 passes for 146 yards with one touchdown and one interception. Rookie quarterback Justin Fields entered in the third quarter and completed 9 of 19 passes for 80 yards while rushing for 46 yards.

Fields received a scare to start the fourth quarter after he was drilled by Bills linebacker Andre Smith, who was whistled for roughing the passer. Khalil Herbert scored on a 13-yard touchdown run on the next play.

New York rookie quarterback Zach Wilson had a great showing, passing for 128 yards and two touchdowns in the victory. New Jets wide receiver Corey Davis had four catches for 70 yards while tight end Tyler Kroft caught both scoring strikes from Wilson. Matt Ammendola kicked three field goals for the Jets, including a 54-yarder. Kurt Benkert played the whole way at quarterback for Green Bay, which was without Jordan Love (shoulder). Benkert finished 18-for-25 for 151 yards with a touchdown and an interception. The Packers finished with three turnovers.

Tua Tagovailoa passed for 183 yards and a touchdown and Myles Gaskin scored twice as host Miami cruised past Atlanta. The second-year quarterback found Gaskin for an 8-yard touchdown pass in the second quarter to highlight a crisp effort against a Falcons team that rested its starters. The Dolphins’ first unit played the opening half and went into the locker room with a 14-3 lead. Atlanta’s A.J. McCarron, who is competing to be Matt Ryan’s backup, was 3-of-6 for 43 yards before leaving with a knee injury. Feleipe Franks came on and completed 4-of-9 passes for 46 yards and an interception.

Baltimore posted a victory at Carolina to equal the NFL record by winning its 19th straight preseason game, tying Vince Lombardi’s Green Bay Packers from 1959 to 1962. The Ravens rested about half of their offensive starters, including quarterback Lamar Jackson, and Tyler Huntley threw for 187 yards with an interception in his place. Nate McCrary and Ty’Son Williams each rushed for a score for Baltimore. Sam Darnold only attempted two passes for Carolina, one of which was a 16-yard completion to Robby Anderson, his former teammate with the New York Jets. Christian McCaffrey did not suit up for the Panthers, who totaled only 33 yards on 17 rushing attempts without their star tailback.

Ben Roethlisberger posted a perfect quarterback rating of 158.3, throwing two touchdowns in Pittsburgh’s triumph over Detroit. Roethlisberger completed 8 of 10 passes for 137 yards for the host Steelers, while the Lions sat quarterback Jared Goff. Running back Najee Harris, Pittsburgh’s first-round pick this year, totaled 10 yards on four carries but caught two passes for 53 yards. David Blough was 12-for-17 for 143 yards and a touchdown to pace Detroit, while Mason Rudolph went 13-for-18 for 138 yards in relief of Roethlisberger, and Dwayne Haskins came on to pass for 56 yards and run for 10.