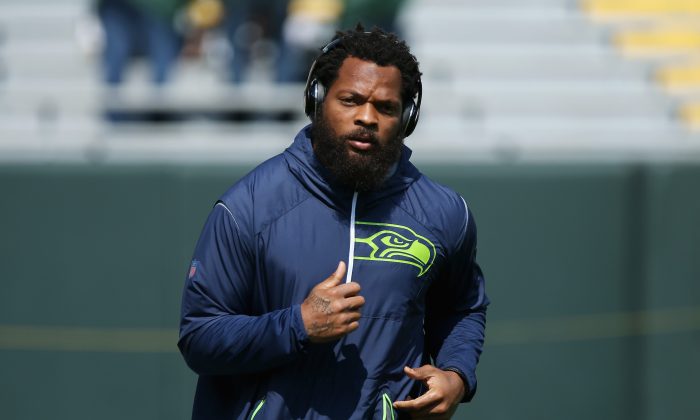 Michael Bennett #72 of the Seattle Seahawks warms up before the game against the Green Bay Packers at Lambeau Field on September 10, 2017 in Green Bay, Wisconsin. (Photo by Dylan Buell/Getty Images)
NFL

NFL Players Are Protesting on the Field Now

NFL players are now protesting on the field.

During Sunday’s matchup between the Seattle Seahawks and the San Francisco 49ers (which saw the Seahawks win 12-9), Seattle defensive end Michael Bennett celebrated a sack of 49ers quarterback Brian Hoyer with a raised fist in the air, reminiscent of the 1968 Black Power salute at the Mexico City Olympics.

Since last season, players have been sitting, taking a knee, or raising fists during the U.S. national anthem. Bennett’s move appears to be the first such instance of an NFL player taking that protest to the field.

For his part, Bennett sat on the bench during the anthem. Seattle center Justin Britt and running back Thomas Rawls stood next to him. Teammates Cliff Avril and Frank Clark also sat down next to him, according to the New York Post.

Ex-49ers quarterback Colin Kaepernick, who is without a job in the NFL, is generally credited with starting the trend of players sitting for the national anthem.

But NFL ratings have slid since last season.

This season, “Thursday Night Football” was down by 13 percent, while Sunday games on Fox and CBS also declined, according to Bloomberg News.

Total viewership for Week 1 in the NFL (which excludes Monday Night Football) saw total viewership down by 13 percent and by 14 percent in the 19-49 age demographic as compared to Week 1 of the 2016 season, according to a report by Guggenheim Securities, reported Forbes.

A CBS study released late last month cited the “Colin Kaepernick effect” for the decline in ratings. The average television viewership for the 2016 NFL season dropped by about 8 percent last year from the previous year.

“We did research and it was relatively proprietary research, to be honest with you,” CBS Sports Chairman Sean McManus said, per Sports Illustrated. “But I think if you look at some of the reasons why NFL viewership was down last year, that is a reason that’s mentioned by a fair amount of viewers. It is something they don’t find attractive or they find don’t compelling in coverage of the football game. How big a factor it was? I don’t really know. But it was one of the factors that I think perhaps led to the slight decrease in ratings last year.”

Some executives said that the anthem protests aren’t the only reason for declining ratings.

“We were affected the least of the media partners of the league last season,” said Shanks, per Forbes. “Whether it was [viewership] competition; whether it was the quality of the games, along with the presidential election and its debates, it influenced the ratings. What’s key is after the election, the ratings bounced back.” Shanks didn’t touch on Kaepernick’s or other players’ protests.

In the New York Post’s Facebook post on Bennett’s raised fist protest during Sunday’s game, a number of commenters suggested that they don’t watch NFL games any longer due to the protests. “People usually watch games, go to concerts, etc. to escape the world’s madness. Let the people just have their time away from the insanity,” wrote one person.

“The NFL is going to implode,” added another. “We pay to watch football. If we want politics, we will watch CNN or FOX. When we cannot escape Politics … I will turn it off.”