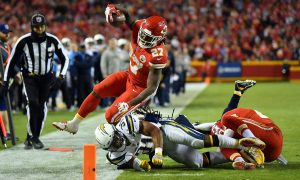 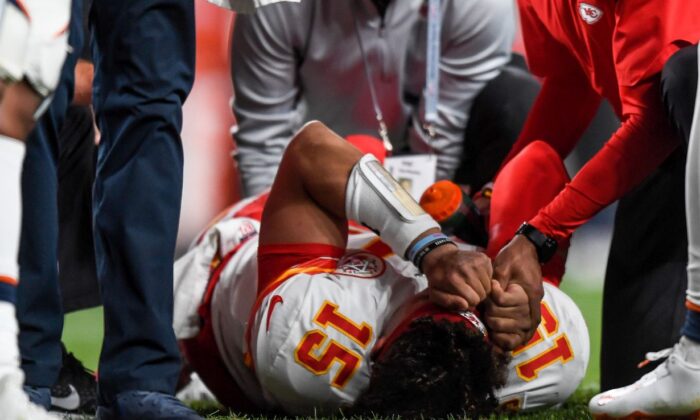 Patrick Mahomes #15 of the Kansas City Chiefs is tended to by trainers after sustaining an injury in the second quarter of a game against the Denver Broncos at Empower Field at Mile High in Denver, Colo., on Oct. 17, 2019. (Dustin Bradford/Getty Images)
NFL

In the second quarter, Mahomes, suffered a knee injury during a quarterback sneak.

According to ESPN, he suffered a patella dislocation and is set for an MRI to determine the severity of the injury. They will attempt to determine if any ligament damage was done.

The broadcast showed medical staff tending to Mahomes’ knee right after he went down. At one point, a staffer straightened his kneecap and popped it back into place.

Mahomes was then helped off the field by several Chiefs trainers. The 24-year-old then was taken to the locker room and didn’t return for the remainder of the game.

Chiefs coach Andy Reid said that Mahomes had told him he is going to be fine as he walked off the field.

“Not too many people get hurt on a sneak,” Reid said following the game, ESPN reported. “It’s a freak thing, and it happens.”

On Twitter, Mahomes wrote: “Awesome team win! Love my brothers! Thank you for all the prayers! Everything looking good so far!”

“Everybody could have known something was wrong,” Laurent Duvernay-Tardif, Chiefs guard who is also a medical school graduate, told CNN.

“He was saying, ‘It’s out, it’s out.’ Nobody really understood what he meant at that time and then we saw it,” he also stated. “That’s when we started panicking. Not panicking but seeing that he was not all right.”

Awesome team win! Love my brothers! Thank you for all the prayers! Everything looking good so far! #GodisGood #ChiefsKingdom

“His knee didn’t even look like a knee,” Chiefs tight end, Travis Kelce, also said. “It was all out of whack. I couldn’t even describe it.”

Veteran quarterback Matt Moore replaced Mahomes after he went down.