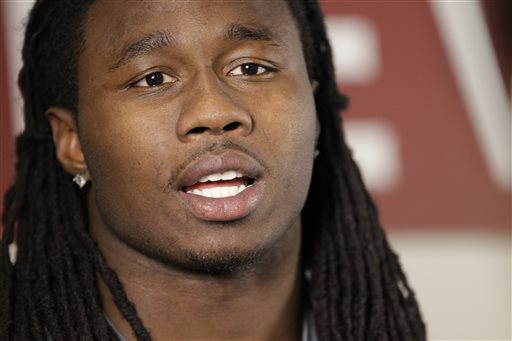 This May 6, 2014 photo shows NFL Draft prospect Sammy Watkins, a wide receiver from Clemson, during an interview at the 5th Annual NFL Pre-Draft Gifting & Style Suite at the Sean John show room in New York. Watkins is among dozens of prospects on the National Football League's annual draft, with 32 players per round and seven rounds, beginning Thursday night at Radio City. (AP Photo/Frank Franklin II)
NFL

The 2014 NFL draft is set to start on Thursday night.

While the draft starts on May 8 it will go through May 10.

Round 1 will take place on Thursday, rounds 2-3 on Friday, and rounds 4-7 on Saturday.

The draft will be broadcast on ESPN.

See a preview from the Associated Press below and a piece about the latest rumors regarding the teams with the top picks here.

NEW YORK—Wearing diamond studs and pressing a cellphone to his ear, Missouri defensive end Kony Ealy saunters into a gift suite, compliments of Diddy, and closes his eyes as he slides into a barber chair for a trim.

He’s looking serious and busy like the pro he may soon be when the NFL draft is over.

Ealy, the swag swirling around him, from luggage to Ciroc, is among dozens of prospects on the verge of the big time, leaving old lives behind and heading to the circus of media, money and a shot at stardom.

The NFL’s annual draft begins Thursday night at Radio City Music Hall. Ealy is projected to go late in the first round. Does he worry about where he’ll land, considering he never left his home state for college?

“Don’t matter, ’cause now it’s a business. You have to treat it like a business,” the straight-faced Ealy said Tuesday between his visit to the Old Spice grooming station and a round of interviews at Diddy’s Sean John headquarters, just a few blocks from where the draft will be held and one of his many stops during a crazy week of appearances.

Ealy wasn’t much interested in the gift tables, and he shrugged off the pressure.

“I’m handling it like I’ve been there before and that’s what I’ll keep doing. That’s something my high school coach told me and I never forgot it,” he said.

Fellow draft prospect Sammy Watkins, a wide receiver from Clemson, picked up a Hawaiian shirt and a leather bracelet, his Beats headphones on his head as he prepared for another jump outside his comfort zone.

The Floridian gave up offers from three schools there to head for college in South Carolina, so unlike Ealy, he already knows what it feels like to live far from family and old friends.

Watkins’ head was spinning. This is his first trip to New York City. He had just stepped off the plane and went straight into a few days of crazy, touring the 9/11 Memorial Site, handling phone calls and waiting on his family to arrive.

“I’m gonna have some fun,” he laughed. “I’m gonna go out a little bit with the fam. We’re gonna party it up.”

And the first thing he’ll buy if a big contract comes his way? “I gotta get my mom whatever she wants,” he said. “Whatever she needs.”

Watkins has a good idea how his life would change, on and off the field, if he makes the pros. At college, he said, there was always a party: “We lived it up. I’ll miss the team the most. My brothers.”

In the NFL, “You’ve got to push yourself. The game is quicker, faster. Some of these guys have families, kids and just want to do the job. I’m ready for that,” he said.

Ealy’s already a little bit Hollywood in long leather pockets on his sweats and a matching leather zip shirt.

But, like Watkins, his dreams haven’t changed that much since he played ball in high school. He wants to help his dad make ends meet back in the St. Louis area.

Growing up playing both basketball and football, he can feel his big moment: “Being able to provide for my family, you know what I’m sayin’? That was the dream then and that’s it now.”

Morgan Moses, an offensive tackle at Virginia, may also go late in the first round. He, too, had never been to New York and has never lived away from his home state. He had one foot in the Sean John green room, scooping up a few gift bags, and another back on campus.

“You know, it’s crazy. I’m finishing up with school and I’m here, but I’m working on my last 20-page paper,” he smiled.

Moses, at 6-6 and more than 300 pounds, plans to rely on his years at Fork Union Military Academy back home in Virginia to navigate the pros. It’s where he straightened himself out after a rough patch in high school.

“There were uniforms and everything,” he said. “I had to cut the dreads off, but it was that discipline, you know? There were a lot of obstacles coming forward. You just want to be the next big thing growing up and it’s time to be here and to be that.”

He wasn’t sweating bad money management, faux friends turning up for free tickets and jerseys or any of the other things the league’s family engagement program warned about at a breakfast for the relatives of draft prospects, held at the same time some of the players sat down to breakfast with NFL Commissioner Roger Goodell.

“The first thing I’m going to buy? I’m pretty frugal with my money so probably a home to live in. I’m going to let everything else take care of itself,” Moses said.

Calvin Pryor, a free safety out of Louisville, had a balancing act on his mind: How could he keep trusted friends and, with any luck, manage a high-profile career? He plans to carry this philosophy into the pros: