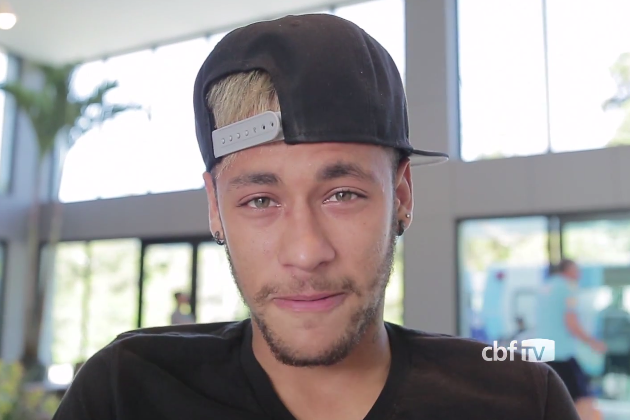 Neymar Jr is not letting his back injury dampen spirits in Brazil.

The Brazilian soccer star thanks fans and everyone else for their support in a short video on Saturday.

Check out the original video, and transcript of his speech below.

“There aren’t enough words to say what’s going through my mind and my heart.

“I just wanted to say that I will come back as fast as I can.

“I hope to be back soon.

“I wanted to thank you for all the support and care you’ve given me, everything that you’ve written in messages and to say that  my dream is not over.

“It was interrupted by a play, but it continues.

“My teammates will do everything so that I can realize my dream to be champion.

“My dream was also to play in a World Cup final, but it won’t be possible this time.

“We will get through this and we will be champions.

” will be there together with them and us Brazilians will be commemorating this.

Neymar a Victim of the World Cup Show

RIO DE JANEIRO (AP) — “I kept getting tripped up and kicked to pieces …,” said Brazil’s superstar player, “and the referee did nothing to protect me or my teammates from these rough-house tactics.”

Neymar, describing how he was battered at this World Cup and is now out after a Colombian opponent fractured his back?

No, this was Pele, recalling opponents’ vicious fouls that hobbled him at the 1966 tournament, part of what prompted a (later rescinded) vow from the king of futebol never to play in the World Cup again.

In short, the warning signs that Neymar was going to be targeted, that rival players without his genius would use force to stop him because they don’t have his skills, were decades old. They were there for all to see in Brazil — except, clearly, for referees and FIFA officials who are as guilty as Colombian defender Juan Camilo Zuniga for Neymar’s ruined World Cup. They did too little to protect the 22-year-old from football’s brutes, the cynical masters of the dark art of kicking rivals black, blue and out.

And now it’s too late. Time will mend Neymar’s fractured third vertebra. But it will never be able to give back the one chance he had to win the World Cup on home soil. He will have retired whenever football’s showcase tournament next visits these shores. That wound can never be healed.

Zuniga’s post-match explanation — “I didn’t mean to hurt him” — was as worthless as Brazil’s currency in the days of hyperinflation. Zuniga may not have intended to break a bone. But any time anyone takes a running jump at the small of someone’s back with their knee raised like a battering ram, physical damage is likely, predictable and so also avoidable.

At best, Zuniga was reckless. We would call police and personal injury lawyers if someone charged us like this on the street, sending us to hospital. In football, Zuniga’s lack of care toward another human being didn’t even earn him a caution.

FIFA and the Brazilian government needed so badly for the football to be brilliant at this World Cup. And it has been, partly because FIFA referees are being lenient with fouls, not handing out as many cautions and red cards as they should and letting play run on. That is what Spanish referee Carlos Velasco Carballo did when Zuniga ended Neymar’s World Cup, leaving him face down in agony on the pitch.

But what Carballo didn’t do is as much of a concern. He blew for 54 fouls but handed out just four yellow cards, two to Brazilians and two to Colombians. In short, he saw ugly play all around him but didn’t do enough to stop it.

That is being repeated across this World Cup. There was no caution for Belgium players who hacked in succession at Lionel Messi’s legs as he made a first-half run for goal in Saturday’s quarterfinal. The slow-motion was hypnotic, revolting, showing boots aiming not for the ball but for the calves, shins and ankles of the four-time world player of the year.

The hatchet-men are so good, trained even, at hiding their destructive intent. They leave seemingly innocent legs trailing like trip-wire. When they could land on grass, they instead come down on opponents’ ankles and feet, fragile bones vulnerable in today’s ultra-light shoes.

They tag-team, taking turns to foul particularly gifted players to lessen the risks of a referee’s card for repeat offending. They pretend to look elsewhere when they thunder into a collision. When he flattened Neymar, Zuniga was looking up at a ball he was never going to get, because it was falling for the Brazilian in his path.

And don’t fall for the myth that Brazil players are above such cynicism. They targeted Neymar’s opposite number for Colombia, James Rodriguez. Watching two 22-year-olds being bullied was not pleasant.

FIFA statistics counted 35 tackles on Neymar at this World Cup. Just one player so far got more, Chile’s Alexis Sanchez, with 36. FIFA’s tallies also show Neymar was one of the most fouled players. That is to be expected given that he runs at opponents and, as an attacker, is at the heart of the fray.

But unexpected and alarming is why referees are being more lenient than they have been for decades. According to FIFA, they have shown an average of fewer than three yellow cards per game, a rate lower than at any World Cup since Mexico in 1986.

“The bar for yellow cards has been set much too high,” retired Swiss referee Urs Meier, who officiated at the 1998 and 2002 World Cups, wrote Saturday for the website of German weekly Focus.

“An awful lot is being tolerated,” he added. “No one should be surprised that people are injured.”

But with FIFA’s referees curbing their interventions, games have been end-to-end and goals have rained in. FIFA President Sepp Blatter and Brazilian President Dilma Rousseff, both eyeing re-election, are delivering World Cup bread and circus. The pulsating football has, for now, largely pushed aside bothersome questions about spending billions on stadiums and suspected corruption.

Even without Neymar, the show must go on.