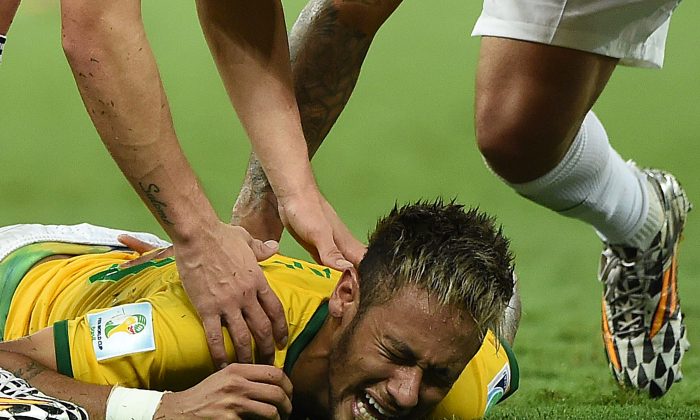 Brazil's forward Neymar (C) lies on the pitch after being injured during the quarter-final football match between Brazil and Colombia at the Castelao Stadium in Fortaleza during the 2014 FIFA World Cup on July 4, 2014. (EITAN ABRAMOVICH/AFP/Getty Images)
News

Neymar was stretchered off the field after a foul by Colombia’s Juan Zuniga in the 87th minute.

See photos of the incident below, and videos of the foul after that.

When the news was breaking, BBC’s Ben Smith reported that the Brazil super star has been taken to a hospital in Fortezela.

It appeared that Neymar has sustained a back injury, and according to Fox Soccer then, it “does not look good.”

Brazil coach Luiz Felipe Scolari told FIFA.com that Neymar was taken to a “private clinic,” and that “it won’t be easy for him to recover based on the fact that it’s a back injury and with the pain he’s in.”

The FIFA World Cup official Twitter quoted Scolari as saying that Neymar will not be “able to play in the next match” shortly after Neymar was taken to either the hospital or the clinic.

Brazil is set to face Germany next in a 2014 World Cup semi final match.

Brazil team doctor Rodrigo Lasmar confirmed that the striker is out of the World Cup.

Lasmar told TV Bandeirantes, “It is a benign fracture.”

“This news is not easy, but he will not be available at this World Cup.”

“The fracture does not require surgery. There will be a conservative treatment; [he] needs comfort to ease the pain.”

In a video released by the Brazilian football confederation on Saturday, Neymar thanked fans and everyone else for the support in his “very difficult moment.”

“I don’t have words to describe what has been going through my head and my heart,” said Neymar, trying to look upbeat but still sporting a subdued look on his face.

“I just want to say that I will be back as soon as possible.

“When you least expect I’ll be back.”

Wearing a black T-shirt and a black hat turned backward, he spoke in a low tone of voice, his eyes still heavy.

“It was interrupted by one move, but it will continue and I’m certain that my teammates will do whatever possible so I can fulfill my dream of being a champion.

“I won’t be able to fulfill the dream of playing in a World Cup final, but I’m sure they will win this one, they will become champions, and I will be there with them, and all of Brazil will be celebrating together.”

See an AP story on Neymar’s injury below.

FORTALEZA, Brazil (AP) — With tears streaming down his face after being kneed in the back, Neymar was carried off the field on a stretcher.

He won’t be coming back. Not to this World Cup, anyway.

The 22-year-old Brazil striker, the one with the hopes of a nation on his shoulders, was ruled out of the rest of the tournament after fracturing his third vertebra during Friday’s 2-1 quarterfinal win over Colombia.

“It’s a big loss for us,” Brazil midfielder Fernandinho said. “We need to find a way to stay together and become stronger after losing our greatest player. We will try to win this World Cup and for sure we will dedicate it to Neymar.”

Neymar is the biggest football star in Brazil, and one of the biggest at the tournament along with Argentina forward Lionel Messi. His face has been plastered on billboards and shown on television continuously, leading many of his staunchest supporters to copy his dyed-blonde fauxhawk.

His millions of fans had expected Neymar’s World Cup to end with him holding the trophy, not being carried off the field in tears.

Neymar was kneed by Colombia defender Juan Camilo Zuniga late in the second half at the Arena Castelao. He was taken to a private clinic and was released a short time later.

He was not expected to need surgery, Brazil team doctor Rodrigo Lasmar said, but he will also not be able to face Germany on Tuesday in the World Cup semifinals.

“He will not be in condition to play, he will need a few weeks to be fit again,” Lasmar said. “He is very, very sad.”

About 50 Brazil fans, many still wearing the team’s jerseys, crowded outside the clinic where Neymar was taken, while the ambulance that carried him remained parked in front, lights blazing.

Neymar was hurt in the 86th minute, falling to the ground in pain after Zuniga jumped into him from behind.

Brazil teammate Marcelo quickly called for medical assistance when he saw Neymar writhing in pain. Neymar stayed face down until team doctors arrived and put him on a stretcher.

“Everybody knew that Neymar would be hunted,” Brazil coach Luiz Felipe Scolari said. “It’s been happening in the last three matches and we had been talking about it. But nobody listens to us.”

Friday’s match ended with 54 fouls in total — 31 by Brazil and 23 by Colombia. Scolari said Spanish referee Carlos Velasco Carballo should have done more to take control of the match.

According to Hulk, another of Brazil’s striker, Neymar needs more protection from the officials.

“Every time is like this. Players always come after Neymar,” Hulk said. “The referees need to do more to keep this from happening.”