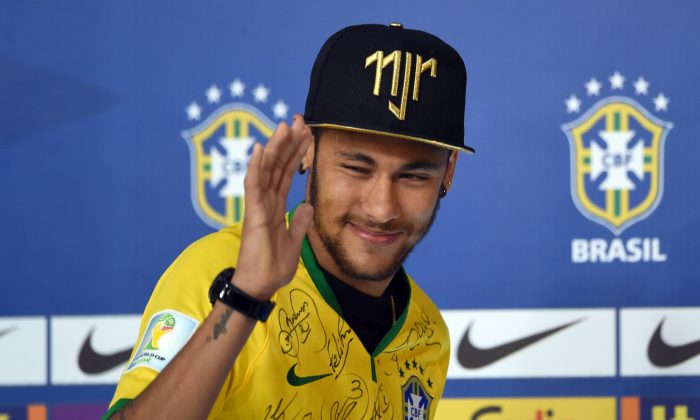 Brazil's forward Neymar gestures during a press conference in Teresopolis on July 10, 2014, during the FIFA World Cup. Brazil will face Netherlands on July 12, in the third place play-off for the FIFA World Cup tournament at The Mané Garrincha National Stadium in Brasilia. (VANDERLEI ALMEIDA/AFP/Getty Images)
Sports

Neymar thinks its still too early to settle down, and has been hanging out with son in his down time.

In an interview with Brazilian television channel Globo, Neymar said that it was too early to think about marrying his girlfriend, 18-year-old Brazilian actress Bruna Marquezine.

Neymar is 22 this year, and is already a father to David Lucca. Neymar had earlier revealed that the mother of his son is Carolina Nogueira Dantas, an ex-flame. David Lucca was on on August 24, 2011.

The Brazilian star also admitted in the Globo interview that “Brazilian football is behind.”

“We’ve slipped behind and we have to be man enough to admit it.”

Neymar had to seat out Brazil’s semi final 7-1 humiliation at the hands of Germany because Colombia defender Camilo Zuniga fractured Neymar’s third vertebra following a flying tackle to his back.

Zuniga is still getting death threats till this day, according to his father.

“We heard nasty comments and threats by phone and email. They are crazy and rude messages,” Zuniga’s father told Lancenet.

“As a parent I am worried, but not only for him, but his wife and daughter, I hope that the dust will settle and we can all move on.

“Neymar has acquitted him of responsibility – my boy was not at fault. He is not violent and has no past history of nasty moves.

“What happened to Neymar happens to all players, injuries are part of football.”

Check out some photos of Neymar, Bruna, and David Lucce.

[View the story “Neymar, Bruna, and David Lucce” on Storify]