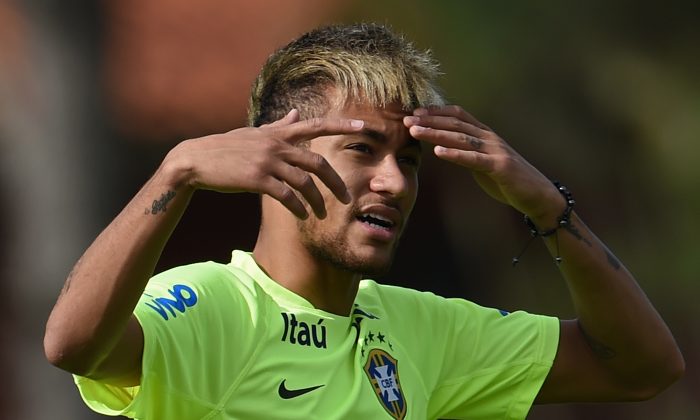 Brazil's forward Neymar takes part in a training session at the Granja Comary training complex in Teresopolis, on June 26, 2014, during the 2014 FIFA World Cup in Brazil. (VANDERLEI ALMEIDA/AFP/Getty Images)
Sports

Neymar’s skills and speed on the football field are unquestionable, but the identity of his current significant other remains very much a mystery.

The 22-year-old Brazilian forward has been linked with three women so far: Bruna Marquezine, Gabriella Lenzi, and Patricia Jordane.

The least dubious of the trio is Bruna Marquezine, partly because of a social media trail confirming that they at least used to see each other.

According to fansshare.com, Neymar and Marquezine are in a on-off relationship. The couple supposedly split up in January, but might have gotten back together again in June as Neymar posted a photo of them on Instagram after the match between Croatia and Brazil.

Marquezine, who is 18 years of age, is an actress on the Brazilian soap opera Em Familia, and once took part in the Brazil version of Dancing With the Stars.

Another girl that Neymar is linked with is Gabriella Lenzi, a model from Sao Paulo. Apart from hearsay, there is no evidence, at least on social media, to suggest that that Brazil’s golden boy and Lenzi are together.

The last woman, Patricia Jordane, has been called out by Neymar’s agents to be an imposter girlfriend.

Jordane, who is a model, told reporters that she dated Neymar for three months in 2013, and they split up when Neymar started seeing Marquezine.

See an Associated Press story below on Patricia Jordane and her supposed Neymar link.

SAO PAULO (AP) — The cover of the latest issue of Brazilian Playboy carries a photo of a stunning model posing sensuously in a swimming suit with the headline: “Patricia Jordane, the brunette that enchanted Neymar.”

Neymar’s agents filed an appeal to a Sao Paulo court to have the edition pulled from newsstands nationwide — and a judge agreed.

Judge Andreia Galgardo Palma ruled the magazine could no longer be sold and ordered its publisher to pick up all unsold copies from newsstands.

The request for the restraining order was made by NR Sports, the company that manages Neymar’s career.

In a statement on its website, NR Sports said Wednesday the magazine published a lie about Neymar’s personal life and used his name without its authorization. It offered no details.

The judge said the publisher would be fined about $4,500 a day if it failed to obey her order.

Publisher Grupo Abril can appeal the ruling, but had yet to say if it would.

Sergio Xavier, the editor of Brazilian Playboy, said in an email that as yet the magazine hadn’t been notified by any legal authority that it had to pull the June edition, and that “the magazine remains available” across the country.

Shortly before Playboy hit the newsstands earlier this month, Jordane told reporters she had once been romantically involved with Neymar.

She said they had dated for about three months in 2013 and that the relationship ended when Neymar started seeing his current girlfriend, Brazilian TV star Bruna Marquezine.