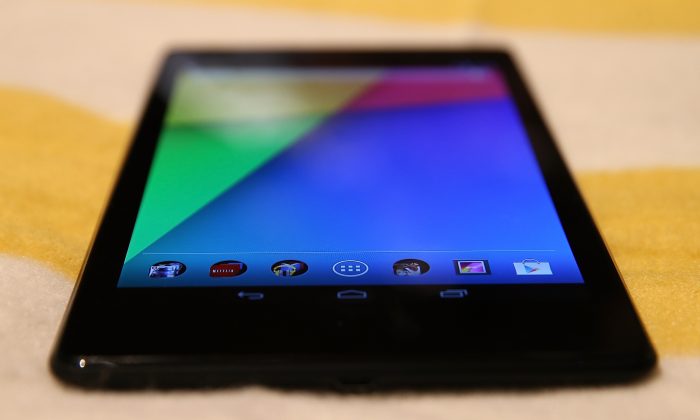 The new Google Nexus 7 tablet, made by Asus is displayed during a Google special event at Dogpatch Studios on July 24, 2013 in San Francisco, California. Google announced a new Asus Nexus 7 tablet and the Chromecast SDK. (Photo by Justin Sullivan/Getty Images)
Tech

Google and HTC are supposedly working on a new Nexus tablet together, and some specifications have surfaced.

The Nexus 8 moniker came from Germany developers who found it via the Chromium Code Review.

Because of the phone’s 8.9-inch screen, some have referred to the tablet as the Nexus 9.

Meanwhile, serial tech tipster site @evleaks has pointed out that the tablet, codenamed T1, could also be referred to as the HTC Volantis or HTC Flounder.

Recently, TalkAndroid.com has provided some specs of the Nexus 8. It allegedly will have a 8.9-inch, 2560 x 1600p display, a 64-bit NVIDIA Tegra chip, 4GB of RAM, an 8 megapixel camera, and a 1.6 megapixel front camera, as well as optional LTE.

Neither Google nor HTC have announced that they are working on a new Nexus tablet, which means there is no official release date, so some guess work is required.

Nexus devices normally launch with the latest version of Android. Google’s upcoming mobile OS is currently known as Android L, and it has been speculated to be ready for public consumption around October or November.

Here are the specs on the device, according to KnowYourMobile: