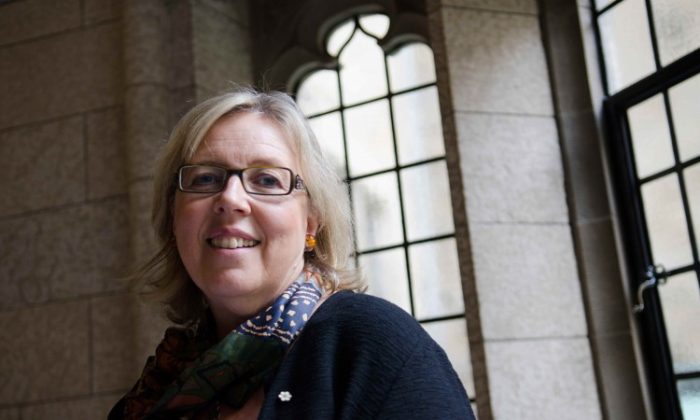 Green Party Leader Elizabeth May said she cannot understand why some MPs find it so hard to admit that China is run by an authoritarian regime. (Matthew Little/The Epoch Times)
US

PARLIAMENT HILL—As the government considers the pending takeover of Nexen by Chinese state oil company CNOOC, there is a crucial fact that members of Parliament seem to be loath to acknowledge.

There are arguments to be made for and against the Nexen sale, but to date even opposition parties have shied away from questioning whether it should matter that the China National Offshore Oil Corporation is owned and controlled by an authoritarian regime.

In fact, some MPs go to great lengths to avoid even acknowledging China is under authoritarian control. The Epoch Times asked 20 MPs whether China was under authoritarian rule and received answers ranging from unclear to a bit odd, with only two answering clearly and directly that China’s ruling regime is authoritarian.

There is little ambiguity that that is the case. China has remained under the iron-fisted rule of the Chinese Communist Party for 60-plus years. Despite economic reforms that have made China an attractive investment destination, the Party violently suppresses political dissent, tightly controls the media, and maintains supremacy over the judicial system.

CSIS (Canadian Security Intelligence Service) made it impossible to ignore security concerns relating to the Nexen deal when it raised the prospect of espionage being carried out by state-owned enterprises in a report.

NDP MPs had previously raised security issues in passing, while giving more attention to the company’s dubious human rights and environmental record. But there has been an aversion to linking CNOOC to the regime that owns and controls it. The CSIS report is widely held to make that connection.

“While the vast majority of foreign investment in Canada is carried out in an open and transparent manner, certain state-owned enterprises (SOEs) and private firms with close ties to their home governments have pursued opaque agendas or received clandestine intelligence support for their pursuits here,” the report said.

The report notes that companies with ties to foreign intelligence agencies or hostile governments could threaten Canadian security if they gain control over strategic sectors of the Canadian economy.

“CSIS expects that national security concerns related to foreign investment in Canada will continue to materialize, owing to the increasingly prominent role that SOEs are playing in the economic strategies of some foreign governments.”

Most concerns raised about the deal in the House of Commons have been about the government’s failure to clearly define the net benefit requirement in the Investment Canada Act, and the secretive nature of how the government decides whether to allow foreign takeovers that require a review under the act.

The Liberals have said reciprocity is the main issue; that Canada should be able to buy Chinese oil companies like they do ours—something currently impossible.

The NDP have begun questioning whether it is okay for a foreign country to effectively nationalize Canada’s natural resources.

But there remains silence over the exact nature of who owns CNOOC, though the NDP’s natural resources critic Peter Julian pointed to the close ties between the company and the regime.

“CNOOC’s chair was nominated in 2011 by the secretive organization department, confirmed by the Politburo, and announced by the central committee. He was also named party secretary for CNOOC at that time.

“Does the minister see CNOOC’s relation as independent from the state, or will he now admit that Canadians, including many in his own caucus, have legitimate concerns and agree to hold public consultations?” Julian asked during question period Tuesday.

Julian was not one of the two MPs who would clearly say whether the Chinese regime was authoritarian, but he came close.

“Are those basic human rights respected in China. The answer is, no they are not.”

‘Afraid to Speak Their Minds’

But Julian wouldn’t say directly that the Chinese regime is authoritarian—unlike Liberal leader Bob Rae and Green leader Elizabeth May.

“Of course,” Rae answered with a chuckle when asked if China was under authoritarian governance. “It is not exactly a trick question.”

When asked why he thought other MPs had such a tough time answering directly, he said “People are afraid to speak their minds, I guess.”

May also answered with a “Yes.” She said it was not a complicated question and that she could not understand why it was so difficult for some MPs to answer.

“It’s straightforward, obvious. Canada is a democracy, communist China is an authoritarian regime with an appalling record on human rights and it isn’t getting better.”

It’s a question the government has also been unwilling to answer, though that may have been due to communication issues.

Foreign Affairs told The Epoch Times it has no internal indexes that it uses to evaluate foreign governments, but could not answer whether it referenced other indexes that rank governments by their human rights or other records.

A spokesperson said a question asked Tuesday as to whether the Canadian government considered China to be under the control of an authoritarian regime could not be answered by press time Wednesday.