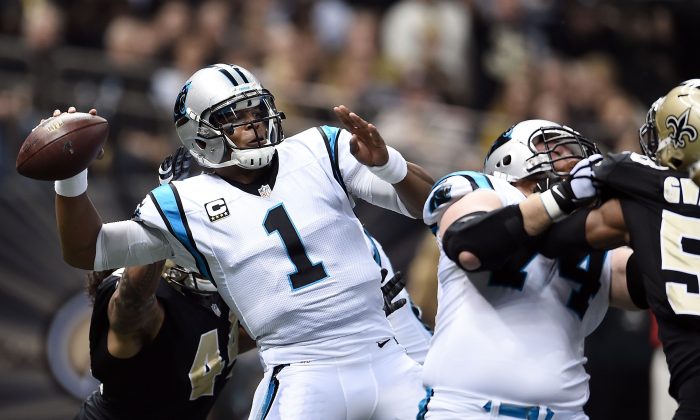 Cam Newton drops back to pass against the New Orleans Saints at the Mercedes-Benz Superdome on Dec. 6 in New Orleans. The Carolina quarterback took a big step toward NFL MVP honors with his performance. (Stacy Revere/Getty Images)
NFL

Newton, Panthers the Class of NFL

Cam Newton and the Carolina Panthers are the talk of the NFL for all the right reasons.

They remain on track to do what only the 1972 Miami Dolphins did—unbeaten regular season and Super Bowl champions.

While it’s too early to talk Super Bowl, at 12–0 and with a manageable final four games, Carolina should match the 2007 New England Patriots and their 16–0 regular season.

And quarterback Newton’s MVP credentials got stronger after his best performance of the season in a thrilling 41–38 win in New Orleans on Sunday. The Panthers’ leader is doing it all his way—improving his passing game while keeping up his running game, and having fun in the process.

Carolina won its third straight NFC South title. The Panthers have now won 16 games in a row dating back to last year’s regular season in which they won the division with a 7–8–1 record.

Perhaps the greatest threat—other than injury—to the Panthers’ unbeaten season is success itself. That success could afford Newton a Sunday off after home field advantage in the NFC has been clinched. Newton, 26, is on pace to run the ball more than ever and has taken his share of big hits. Avoiding injury in a meaningless game would be wise even if it jeopardizes an unbeaten season.

And head coach Ron Rivera said on Monday the goal is to win the Super Bowl, not go 16–0. “We are still playing for playoff positioning,” Rivera said according to ESPN.

The Panthers still have two games left against Atlanta (6–6), who have lost six of their last seven. A visit to the New York Giants (5–7) and a home date against Tampa Bay (6–6) round out the season.

But Arizona is only two games back in the race for home field advantage throughout the NFC playoffs. Thus, Carolina still has some work to do to lock up the No. 1 seed. So Newton probably won’t be seeing any Sundays off until Week 16 or 17.

Carolina is the ninth team in NFL history to start a season 12–0. Six of those teams reached the Super Bowl and four won it. Within the last 15 years, however, only the 2009 New Orleans Saints did it.

Those Saints have given the Panthers fits this year and Newton called Sunday’s win a “wake up call.” Carolina did not play well and ended up in a track meet against Drew Brees’ offense.

With New Orleans up 38–34, Carolina faced 4th-and-4 with 2:09 left. Newton scrambled to his left and lobbed a pass to his favorite target, tight end Greg Olsen, for 16 yards. Three plays later, he found Jerricho Cotchery for the winning score.

“He was able to win a shootout and take a drive in the fourth quarter and give us that chance to win,” Rivera said after the game. Rivera also said he was proud of Newton’s development and of the confidence with which he played.

That confidence is evident when Newton just flicks his wrist and fires accurately off his back foot. His 45-yard TD toss to Ted Ginn Jr. was another case in point.

Newton’s leadership extends beyond just running the offense. He’s looking after his teammates as well. Defensive lineman Kony Ealy was furious after being called for an offside penalty late in the third quarter. On the sideline, Newton was seen calming the big man down after a couple of others had unsuccessfully tried.

Newton, drafted first overall in 2011, has been a steady performer throughout his career, but one of the big improvements this season is his touchdowns to interceptions ratio. It’s never been over 2.0 until this season’s 2.5.

Overall, Carolina’s offense is average in yards gained, but up near the top in scoring. Defensively, the Panthers are among the leaders in fewest yards given up, but a handful of teams are stingier on the scoreboard. They do lead the league in turnover differential, a key stat that usually goes hand-in-hand with winning.

They’re also at their best under pressure. Carolina overcame a 13-point deficit to beat Seattle on the road. They also blew a 17-point lead, recovered mentally, and beat Indianapolis in overtime. The win over the Saints had five lead changes. They’ve won games just about every way you can win them.

Newton matched a career-high with five TD passes against the Saints along with 331 yards passing. The MVP talk will only get bigger as Newton gets compared with the likes of Tom Brady and Carson Palmer.

But one thing Newton does better than those two is have fun while playing the game. “As long as you play this game, have fun,” he said in an interview with Fox prior to the Saints game. He’s got his endzone dance and his stylish blazers. It could well be the time for a new NFL MVP and a new Super Bowl champion.