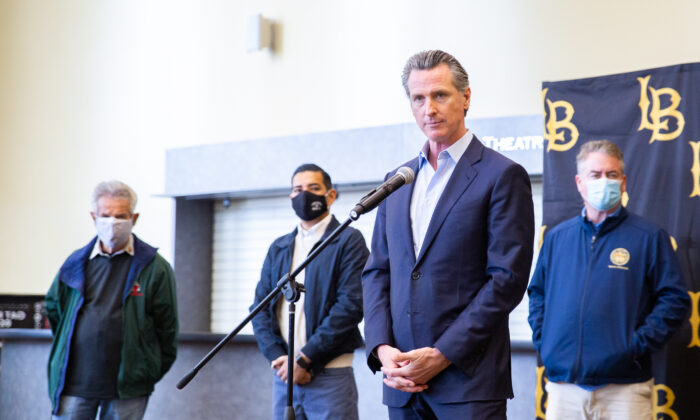 Newsom Signs Legislation to Protect Workers Who Use Cannabis Outside Work

California employers will soon be prohibited from firing—or not hiring—workers over their use of cannabis outside of their workplace and work hours.

Gov. Gavin Newsom signed Assembly Bill 2188 on Sept. 18 to prevent employers from discriminating against a person in hiring, termination, or terms and conditions of employment based on a drug screening test finding the presence of non-psychoactive cannabis metabolites in their system or for the person’s off-duty use.

Recreational use of cannabis is legal in the state.

AB 2188 was part of a series of legislation signed by the governor to “strengthen California’s cannabis laws, expand the legal cannabis market and redress the harms of cannabis prohibition,” according to a Sept. 18 statement by the governor’s office.

“For too many Californians, the promise of cannabis legalization remains out of reach,” Newsom said. “These measures build on the important strides our state has made toward this goal, but much work remains to build an equitable, safe and sustainable legal cannabis industry. I look forward to partnering with the Legislature and policymakers to fully realize cannabis legalization in communities across California.”

“Thank you to the advocates and sponsors for your continued support,” Quirk wrote on Twitter after the signing. “I applaud the Governor for his commitment to redress the harms of cannabis prohibition.”

The law goes into effect Jan. 1, 2024, and exempts those working in building and construction, and job positions that require federal background clearances.

“CA employees deserved the same rights as workers in other states like [New York and Nevada] that already passed laws protecting against workplace punishment for legal marijuana use off-the-clock,” the alliance wrote on Twitter.

California NORML, a non-profit group dedicated to protecting and expanding cannabis consumers’ rights, sponsored the bill. The group told legislators workers have a right to engage in legal activity while away from the job, yet workers and applicants are losing job opportunities or being fired because they test positive for marijuana use.

The California Cannabis Industry Association told The Epoch Times in a previous interview the bill still allows employers to use tests to determine “whether someone is under the influence of cannabis while actively on the job.”

“The bill does not prevent employers from drug-testing employees but rather states that a test for non-psychoactive cannabis metabolites linger in the body for up to months after someone uses cannabis, is not grounds for hiring or termination,” the association’s Executive Director Lindsay Robinson said.

The California Chamber of Commerce opposed the bill, saying it will still risk workplace safety and “create a protected status for marijuana use in [Fair Employment and Housing Act].”

“California employers may face liability when they take legitimate disciplinary measures against their employees,” the California Chamber of Commerce said, according to a bill analysis. “If California policymakers wish to force a shift towards newer testing technologies—that is one thing. But we do not believe marijuana should be elevated to a legally protected status above comparable drugs (like alcohol).”

The governor also signed several other cannabis-related bills, including the following: