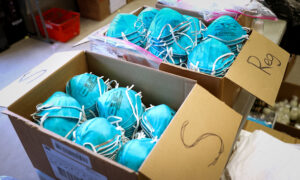 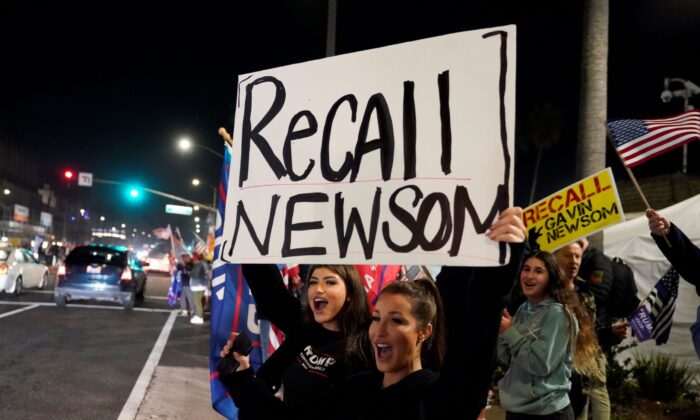 Demonstrators shout slogans while carrying a sign calling for a recall on California Gov. Gavin Newsom during a protest against a stay-at-home order amid the COVID-19 pandemic in Huntington Beach, Calif., on Nov. 21, 2020. (Marcio Jose Sanchez/AP Photo)
Viewpoints

Newsom Recall, a Referendum on China

Mid-terms are just around the corner in 2022 but the race to watch now is the recall election for California Gov. Gavin Newsom. This contest could easily double as a referendum on China, in what is already the most China-compliant state. Consider, for example, the new span of the Bay Bridge from San Francisco to Oakland.

Chinese welds came riddled with cracks and every one of the bridge’s 750 panels had to be repaired. In 2013, dozens of the long metal rods on the project snapped, and during storms, critical parts of the bridge filled with water. All told, the bridge came in a full $5 billion over budget, and 10 years late. Lingering safety issues caused some, including UC Berkeley engineering professor Abolhassan Astaneh-Asi, to avoid driving on the span. None of that seemed an issue for then Lt. Gov. Gavin Newsom.

“We need to move past the debates on solvency and focus on greatness,” said Newsom at the new span’s opening ceremony. “That’s our job, and this is part of it.” Something similar happened last year, when the pandemic was on the rise.

In March 2020, Gov. Newsom declared a state of emergency and during an April 7, 2020 MSNBC appearance, announced a $1 billion deal for “upwards of 200 million masks” with “a manufacturer here in the state of California.” That turned out to be Build Your Dreams (BYD), a Chinese company with no experience manufacturing masks, and at the time the efficacy of masks was still in question.

The $1 billion deal was 30 percent more than the state budget allotted for infectious diseases for the entire fiscal year. Newsom hid details of the deal, even from fellow Democrats. Newsom quickly sent the first installment of $495 million to BYD, and the Chinese company referred reporters’ questions back to his office.

On Oct. 9, 2020, Newsom issued “Guidance for Private Gatherings,” which restricted the number of families attending the same non-public event, recommended a time limit of two hours, and demanded masks and social distancing. The host was to take names of “all attendees,” should contract tracing be needed later.

On Nov. 6, 2020, Newsom attended a party at the upscale French Laundry restaurant in Napa, which continued as an “essential” business during the pandemic. The gathering included a dozen people of different households, including top medical officials, with none of the guests wearing masks or social distancing.

So despite the $1 billion deal with the Chinese BYD company, masks weren’t such a vital need, at least for the governor and his associates. As former San Francisco supervisor Tony Hall explains, this was hardly the only problem.

“Under Newsom’s watch, voters are angry over whipsaw and unrealistic lockdowns that have cost millions of Californians their businesses and life savings and have caused them personal grief. Millions of jobs have been lost, resulting in one of the highest unemployment rates of any state in America and certainly in our state’s history.” And according to Hall there’s more to it.

“Serious homelessness and unprecedented crime are skyrocketing, and yet, while police, safety, and emergency personnel are being downgraded, taxes are rising.” In addition, “schools and churches were closed for a year, depriving students of quality education and depriving people of any communal expression of faith. We now have a $12 billion fraud scandal at the State Unemployment Agency, and pay-to-play politics is the norm in our governmental transactions.”

When Californians launched the recall, state Democrat Party boss Rusty Hicks called it “the California coup,” led by “right-wing conspiracy theorists, white nationalists, anti-vaxxers and groups who encourage violence on our democratic institutions.” As Ben Christopher of CalMatters explained, “a recall campaign is a democratic mechanism written into the California constitution that allows voters to remove an elected official by popular vote.”

In 2003, Golden State voters recalled Gov. Gray Davis, who failed to keep the lights on. This year, Californians will decide the fate of Gavin Newsom, but if voters also considered the recall a referendum on China it would be hard to blame them.