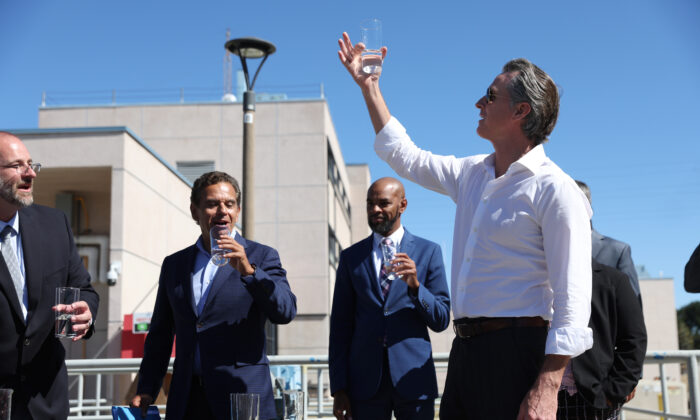 Newsom Promotes ‘Water Abundance’—But the Devil’s in the Details

Standing on the site of a new desalination facility in Antioch, Calif., Governor Newsom recently announced a new water supply strategy. In his remarks, he introduced a disruptive and encouraging theme, one that injects long overdue and much needed balance into the discussion over how to address California’s water crisis.

“So much of the water conversation in this state has been about conservation, a scarcity mindset,” Newsom said. “That’s a relatively small component of the overall strategy we are introducing here today … [Now], we are focusing on creating more water.”

It would be premature to be cynical about the governor’s remarks. Sooner or later, California’s ruling elite will have to face an inescapable truth: During multi-year droughts, conservation alone cannot possibly balance supply and demand for water. The shortfall, or the required sacrifices, is simply too big.

According to the California Department of Water Resources, over the past decade, total water diversions for cities, farms, and to maintain ecosystems totaled 75 million acre feet per year. Every major source for all this water is imperiled.

To begin with, groundwater pumping, averaging 18.7 million acre-feet per year, has withdrawn water faster than it can be replenished with percolating runoff. This has caused wells to dry up, led to ground subsidence, and in some cases is causing underground aquifers to collapse and degrade to the point where they no longer can be refilled. To restore aquifers as a sustainable source of water storage and supply, not only will annual withdrawals need to drop well below 18.7 million acre-feet per year, but until the water levels in the aquifers are restored, total annual withdrawals need to be less than the annual amount of natural recharge.

And then there’s the water California imports via the Colorado Aqueduct, nearly five million acre-feet per year. This depends on Colorado River runoff that is stored in Lake Mead and Lake Powell, which are both at lower levels (pdf) than they’ve been since those massive reservoirs were first built and filled up. At the same time as the entire Colorado River watershed continues to suffer a blistering multi-year drought, the burgeoning cities of Las Vegas and Phoenix are asserting their water rights. In the years to come, we may expect a dramatic reduction in the amount of Colorado River water that will be delivered to California’s farms and cities.

If that isn’t enough, because most of California’s reservoirs are in-stream, their first priority is to prevent flooding. For this reason, they cannot be used to store water from early season storms, such as the deluge that fell in December 2021. If early season storms are allowed to fill these reservoirs, should a late-season storm hit the state, there would be no reservoir capacity left to buffer the runoff and prevent flooding. But during droughts, when an adequate Sierra snowpack fails to develop in order to deliver snowmelt well into the summer months, and no late-season rainstorms inundate the state, summer arrives and the reservoirs are empty.

In his remarks, Newsom quantified these looming shortfalls by estimating that if we do nothing to increase supply, available water to Californians will decrease by 10 percent. That’s 7.5 million acre feet per year. His new water supply strategy (pdf) describes how the projects he’s proposing will create “About 7 MAF (million acre feet)” of new water, but analysis shows that’s not quite true.

For example, the plan calls for a doubling of the state’s desalination capacity, adding 84,000 acre feet per year. This falls far short of what could be done. Most of the existing desalination in California comes from just one source, the Carlsbad desalination plant, which delivers 55,000 acre feet of fresh water per year from the ocean just north of San Diego.

But last May, when the California Coastal Commission denied an approval for a similar large plant—after making the contractor spend over 20 years and over $100 million on permit fees and engineering submittals—Newsom didn’t fire his appointees to the Coastal Commission. It is unlikely a large desalination plant application will ever again be attempted in California. Despite its potential, desalination will never add more than a small fraction of the water California needs, and nothing Newsom’s doing is trying to change that.

By contrast, the most significant component of Newsom’s new water strategy is to “expand storage above and below ground.” This accounts for 4 million acre feet out of the 7 million acre feet total. But this is profoundly misleading, as noted in the footnote on page 3 of the 16 page document, which reads, “Additional storage capacity does not equate to a similar volume of new water supply.”

Indeed it does not. Reservoirs are never completely emptied, and, especially in the case of in-stream reservoirs, they are rarely filled to capacity. As for below-ground storage in aquifers, they can only fill slowly through large spreading basins to capture floodwater in rural areas or via percolation ponds in urban areas, which means water can only be withdrawn from them at the rate water can be injected into them. The so-called “yield” of reservoirs and aquifers is usually, at best, only about one-third of their capacity. These storage projects therefore will not contribute 4 million acre feet per year, but are more likely to add around 1.5 million acre feet.

Considering the opposition any storage projects elicit from environmentalist lobbyists and litigators, who implacably oppose pretty much anything that makes so much as a scratch in the ground, if Newsom can pull off these storage projects it will be a major accomplishment. But how? The plan only estimates groundwater recharge at 500,000 acre feet per year. The plan then commits to finally building the storage projects approved by voters back in 2014, which it claims would increase storage by 2.8 million acre feet.

But the biggest part of that plan, the proposed Sites Reservoir, has endured relentless attacks by environmentalists, and to appease them, the design has already been downsized from 2 million acre feet of capacity to 1.5 million acre feet. Will Sites ever get built? And what about the Temperance Flat Reservoir, a badly needed reservoir south of the delta that voters approved in 2014 but is not on Newsom’s list? What about the Pacheco Reservoir, a desperately needed backup to Anderson Reservoir, essential to guarantee water security to the southern counties in the San Francisco Bay Area? Environmentalists have declared war on these projects, and in California, environmentalists always win.

Newsom, to his credit, made mention of this, expressing exasperation that environmentalist regulations have prevented as many good projects from getting built as bad ones. Is Newsom just triangulating, as he ups his game to run for president? Or does he mean it? Here’s what he said:

“The time to get these dam projects [completed] is ridiculous, absurd and reasonably comedic. In so many ways, the world that we invented, from an environmental perspective, is now getting in the way of moving these projects forward … permits that take years and years and years. And so one of the principles of this plan is our efforts to change our permitting … fast-track these projects, address the regulatory thickets, and move things forward.”

Those of us who have watched California’s infrastructure wither away thanks to endless environmentalist lawsuits can only hope Newsom is serious. Belaying that hope is Newsom’s failure to fight harder for the desalination plant that got torpedoed last May. And right before that crucial Coastal Commission vote, the Pacific Institute released a study (pdf) that claimed Californians could increase their water supply by as much as five million acre feet per year merely by capturing storm runoff and recycling wastewater.

Was the timing of that highly publicized study designed to provide cover for the Coastal Commission to kill a major desalination project that would have made a major contribution to eliminating water scarcity in the Los Angeles Basin? If so, it worked. And if so, is Newsom’s new water strategy, announced at a critical time, just a tactic to prevent support from building to put a water initiative on the ballot in 2024 that might force the state to fund water supply infrastructure and rewrite environmental regulations that have stopped everything cold?

The only other elements of Newsom’s plan are to increase urban wastewater recycling capacity, a relatively uncontroversial idea that could add a substantial 1.8 million acre feet to California’s annual water supply, and, of course, another 500,000 acre feet of water savings per year via even more urban water conservation. Finding another half-million acre feet of water savings would require household water use to drop from the current average of 60 gallons per person per day, to 48 gallons per person per day. Residents who are already enduring annoying restrictions on their ability to shower, wash, or grow greenery around their homes may decide if another 20 percent reduction is desirable.

Altogether, Newsom’s water supply strategy does not add 7 million acre feet of annual new water. If every proposed storage facility is built—extremely unlikely without dealing a major defeat to the powerful environmentalist lobby—and the proposed water recycling and desalination projects are also all eventually completed, it will add about half that much, around 3.5 million acre feet per year.

Again, it is premature to be cynical about what Newsom has done. But to make even this much happen, he will have to overcome a hostile bureaucracy and environmentalist machine that finds joy and fulfillment in cracking down on “water wasters,” and views conservation as the only acceptable policy.