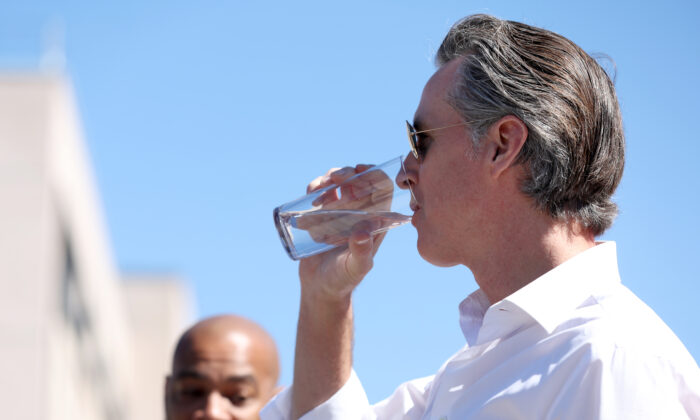 The governor of California on Thursday unveiled a new water-supply strategy that will enhance storing, recycling, and conserving more water that would otherwise go to waste.

Gavin Newsom’s (D-Calif.) proposal comes as drought continues to grip the West Coast and the state prepares to lose 10 percent of its water supply by 2040, according to projections by the Department of Water Resources.

“As a consequence of that deeper appreciation, that deeper understanding, we have a renewed sense of urgency to address this issue head-on,” he continued. “But we do so from a multiplicity of perspectives and ways, not just from a scarcity mindset.”

In a 16-page report (pdf), the governor detailed the strategy to ensure Californians have enough water for the coming generations—with proposed actions including:

“These targeted actions aim to secure supplies for people, so that homes, schools, and businesses do not suffer disruptions, and the state’s agricultural economy continues to thrive,” the report states.

An acre-foot of water is generally considered enough to supply two urban households per year. In total, Newsom is seeking to boost the annual water supply by nearly 3 million acre-feet each year.

California generally consumes for either agriculture, urban, or environmental purposes between 60 to 90 million acre-feet per year, and losing 10 percent of this volume to drought means that about six to nine million acre-feet could disappear, more than the state’s largest reservoir—Shasta Lake—which holds 4.5 million acre-feet.

The proposal doesn’t call for any immediate, mandatory cuts to water use in cities or on farms. Instead, the governor wants Californians to voluntarily reduce their water use by 15 percent. He also asked the state’s more than 400 local water districts to develop their own plans to reduce water usage.

However, Newsom has previously said he wants the Legislature to consider a law that would allow the state to curtail people’s water rights even when there’s no drought. The state operates an archaic system of water rights to govern how much water cities, farms, and others are entitled to take and from where. An effort is underway to digitize records that spell out those terms, some of which are more than a century old.

Interest in water recycling is expanding across the West as states and cities see their water supplies threatened amid extended droughts. About two dozen communities, including those in Nevada and Colorado, rely on some recycled water for drinking, but that number is expected to grow.

Over the last three years, California has invested more than $8 billion in water infrastructure and management, Newsom noted in the report. The recycle and reuse strategy, which would make treated wastewater safe for drinking, would cost an estimated $27 billion by 2040, the biggest price tag associated with the plan.

California State Sen. Brian Dahle, a Republican running against Newsom in this fall’s election, said he supports building more reservoirs, water recycling, and desalination, but doubts the governor’s plan will come to fruition. He pointed to the fact that no projects have been completed with the bond money the state passed eight years ago.

“When do the people wake up and go, ‘I want results. I actually want some results and I want to stop being promised and charged for non-results,'” he said.