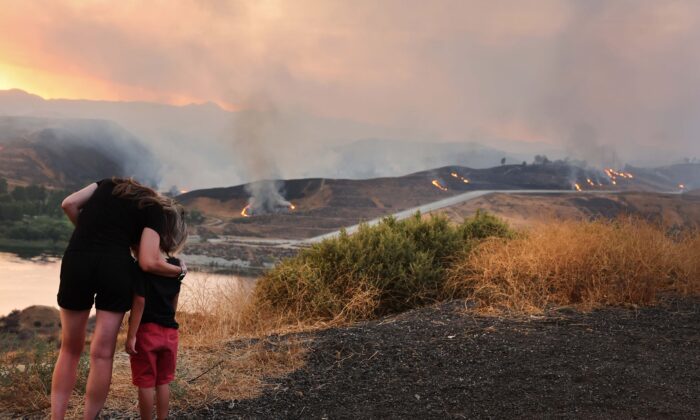 A mother embraces her 5-year-old son, whose school was evacuated during the Route Fire, near Castaic, California, on Aug. 31, 2022. (Mario Tama/Getty Images)
Regional News

California Gov. Gavin Newsom declared a state of emergency on Wednesday as a heatwave spread across the western United States that is set to strain the power grid with increased energy demand.

Newsom’s declaration will temporarily increase energy production and reduce demand, he said. The governor’s emergency proclamation comes after the California Independent System Operator called a “Flex Alert” on Aug. 31, asking Californians to reduce their electricity consumption between 4 p.m. and 9 p.m. this week to save power and reduce the risk of outages.

Californians are being asked to especially reduce energy consumption on Sunday and Monday, which are expected to be the hottest days, and avoid using major appliances like washers and dryers during this period in an effort to ease the burden on the energy grid and reduce the risk of outages.

Newsom said the latest soaring temperatures are a reminder of how climate change is impacting weather patterns, and taking a toll on both public health and critical infrastructure.

“This is just the latest reminder of how real the climate crisis is, and how it is impacting the everyday lives of Californians,” said Newsom.

The emergency proclamation will also temporarily allow power plants to generate additional electricity and permit the use of backup generators during peak energy demand to reduce dependency on the grid.

It also allows ships in Californian ports to reduce the consumption of electricity from the grid.

“These are emergency, temporary measures, and the state will implement additional mitigation measures to counteract the increased emissions they will cause,” Newsom said.

Newsom’s declaration came as wildfires erupted in rural areas of the state on Wednesday when temperatures reached triple digits, forcing hundreds to evacuate.

Santa Clarita Valley Sheriff said on Twitter that fires had been reported in Castaic, prompting the evacuation of residents from the Paradise Mobile Estates and “all structures south of Templin Highway along Upper Ridge Route Road.”

Evacuations are also in effect north of Northlake Hills Elementary School, east of I-5 Freeway, and west of Castaic Lagoon, officials said.

Drought Eating Away at Hydroelectric Generation

California’s plan to transition to clean energy has added an estimated 4,000 megawatts on the grid since July 2020. However, ongoing droughts have crippled the state’s power supply, while the hot weather also impacted its hydroelectric power generation amid a drop in reservoir levels.

Limited energy resources have been stretched across the entire western United States amid the heatwave, which has lasted longer than usual.

The National Weather Service (NWS) said temperatures across California are likely to reach to the upper 90s and lower 100s and reach daily records each day in the coming days.

“Excessive heat warnings are in effect across the desert Southwest and California, with heat advisories stretching across much of the central Great Basin. Little to no relief from the heat overnight will only increase the heat stress and create a potentially dangerous situation for sensitive individuals,” NWS said.

“The hot temperatures and minimal moisture/low relative humidity values will also contribute to an elevated fire weather threat across portions of the northern Rockies and High Plains on Thursday,” NWS added.