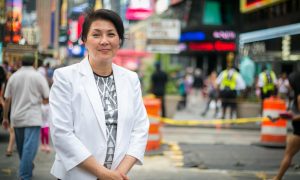 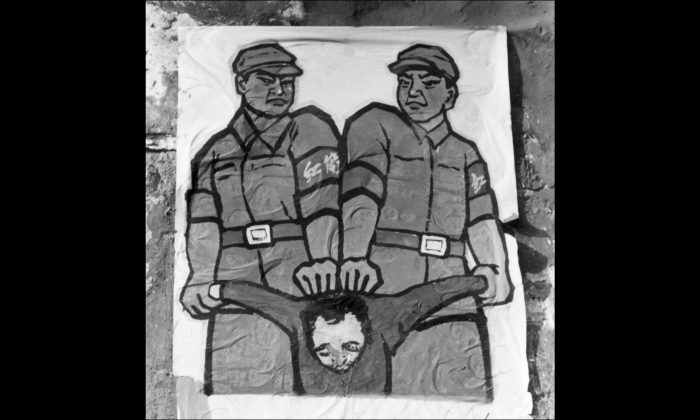 A poster is displayed in late 1966 in Beijing's street featuring how to deal with so-called 'enemy of the people' during the Great Proletarian Cultural Revolution. During the summer of 2008, an angry mob of Chinese heckles organized at the "Quit CCP" booth in Flushing, harassing and beating Falun Gong practitioners. in New York. (Jean Vincent/AFP/Getty Images)
China

A look at the angry mobs in Flushing
By Benjamin Chasteen

“Battle with heaven, fight with the earth, struggle with humans–therein lies endless joy.”

Imagine living in a country where this was its motto.

During the Cultural Revolution, this was the Chinese Communist Party’s slogan. Has anything changed since the late ’60s and early ’70s?

The recent events in Flushing might give the impression this was Beijing during the Cultural Revolution, not New York City today.

For instance, one member of a mob harassing Falun Gong practitioners shouted, “If I kill you I am not afraid,” as another man yelled “You better be careful, I will kill you. I want to see your face clearly. I want to kill you.”

What has incited so much aggression in members of the mob toward their fellow human beings? Confucianism, Taoism, Buddhism, and Christianity; all teach that the overall common theme in religion is to love your neighbor and do onto others as you would have done to you.

Religions teach faith and that we should be benevolent, kind, loving, and caring towards others. They teach that killing is wrong and it is a great sin to kill. It condemns being hateful and teaches that violence is wrong. A non-communist society typically considers humanity’s dual nature of good and evil and acts to restrain evil and support the good. In the U.S., the Pledge of Allegiance speaks of “One nation under God” and so acknowledges a higher power as it is reflected in our society and our freedom of belief.

The Chinese regime calls everything outside of its own theories “superstitions.” Those who believe in religion are subjects for brainwashing and conversion.

China was not like this before the time of the CCP’s rule. Since ancient times, people have believed that rewards come from effort and labor. Through hard work one gains a prosperous life. China’s past taught respect for one’s elders and care for the young.

Those who know of ancient China recognize the traditional character of the principles of Falun Gong: Truthfulness, Compassion, and Tolerance. Falun Gong teaches being kind to others, considering the well being of others first, and having faith in universal laws greater than oneself.

When someone supports the CCP he helps promote the Party’s culture and beliefs. The Party doesn’t believe in faith in anything other than the Party itself. When the Party mentions that a certain group is bad, a supporter of the CCP naturally follows along, and with faith in nothing else than the Party, there is nothing to restrain his actions. Death threats are a tactic that can be used or not used; they are not wrong.

When someone quits the Party, he is recognizing the Party’s wicked nature and is establishing for himself a brighter future. When does promoting violence ever have a positive outcome? Acting out of rage and violence goes against the beliefs of all faiths.

When evil is being done there are always some who will speak out and tell the world what is happening. By remaining silent in the face of the violence inspired by the CCP, one accepts and abides by it.

In Flushing, one sees a battle between those who have no faith, or rather a faith that can encourage all manner of crimes, and those who seek to hold themselves to traditional principles of goodness. This battle is fought within individuals who decide whether to quit the CCP or remain silent in the face of its evil or even join its mobs.

While there are moments in Flushing that sometimes resemble the Cultural Revolution, history teaches putting things in perspective. The Chinese people lived 5,000 years without the CCP, and the Party only came to power a little over 50 years ago. The mobs in Flushing are fighting to stop people from quitting, a fight those mobs cannot possibly win.

But just imagine: If everyone did quit the party and embraced being kind, benevolent, loving, and caring then just maybe our world “could really live as one.”

This article was originally published on Jun 30, 2008, it has been republished for the anniversary of the Flushing attacks against Falun Gong.