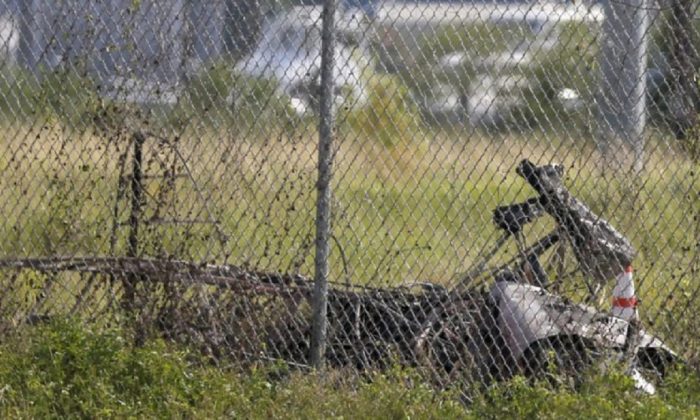 The charred wreckage of a private plane is seen in a field near the Industrial Canal and New Orleans Lakefront airport, in New Orleans on Aug. 16, 2019. (Gerald Herbert/AP Photo)
US News

News anchor Nancy Parker was one of three people killed in a plane crash on Aug. 16.

Parker, 53, was an award-winning journalist at WVUE Fox 8 in New Orleans, Louisiana.

Her death was announced on-air on Friday by anchor Lee Zurik.

He said Parker was on the plane, adding she was “doing what she loved, telling a story.”

We mourn the loss of our longtime colleague and friend Nancy Parker.http://bit.ly/RememberingNancy Details have not…

She was working on a feature about the pilot Franklin J.P. Augustus when she died, the network said. They planned on flying thousands of feet high and doing some stunts. Augustus was one of the few African American pilots worldwide to perform stunts with a propeller-driven plane.

In a statement, Fox 8 said Parker “made a difference in the lives of those she reported on. She will be sorely missed, and her absence creates a void that cannot be filled.”

WVUE General Manager Tim Ingram said in a statement that Parker “was absolutely a joy to work with each and every day.”

“Today we lost a wonderful journalist and remarkable friend, the New Orleans television community lost a true treasure, but beyond that, her family lost a wife, a mother, and daughter. Our thoughts and prayers are with them,” he added.

Glen Boyd, Parker’s husband, said early Saturday in a Facebook post, “I would trade places with her right now,” reported The Times-Picayune.

“My heart is shattered,” he added. “The dearest and most wonderful person in my life is gone. She was our road map, our compass, our guiding light.”

Saddened at the tragic news. For over 20 years, Nancy Parker helped inform the people of NOLA with great storytelling. She also wrote a children’s book that became an annual part of our Book Festival. Our sincerest thoughts and prayers are with her family & the entire FOX8 team. pic.twitter.com/SFd9ie4bXa

Officials and others across the state posted tributes to Parker.

“Nancy Parker represented what’s best about journalism. Her dedication & work ethic were recognized by her peers & our community. We’ll all miss her award-winning storytelling & warm presence on @FOX8NOLA. Jennifer & I are praying for her family as they deal with this tragic loss,” said U.S. Rep. Steve Scalise (R-La.).

U.S. Sen. Bill Cassidy (R-La.) said that Parker “represented the gold standard of journalism in New Orleans. She loved this city. Her loss is heartbreaking. Our hearts and prayers are with her family.”

My heart goes out to the family of Nancy Parker, a beloved reporter & news anchor in New Orleans, wife and mother of three. Thoughts and prayers to all of you during this time.

Gov. John Bel Edwards wrote in a statement that Parker delivered the news for more than 20 years.

“An Emmy-winning reporter, cancer advocate, and author, Nancy used her platform to tell stories that mattered to the people of our state. Please join your prayers to mine and Donna’s for Nancy’s husband and three children as they come to terms with this shocking loss,” he wrote.

Longtime NFL quarterback Drew Brees wrote: “My heart goes out to the family of Nancy Parker, a beloved reporter & news anchor in New Orleans, wife and mother of three. Thoughts and prayers to all of you during this time.”

New Orleans Saints owner Gayle Benson said that Parker “was an outstanding, Emmy Award-winning news anchor, who fostered great trust with both those who she covered and with her viewers in the New Orleans area. Not only was she a leader in local television, but she was also a devoted wife to her husband Glen and their children.”