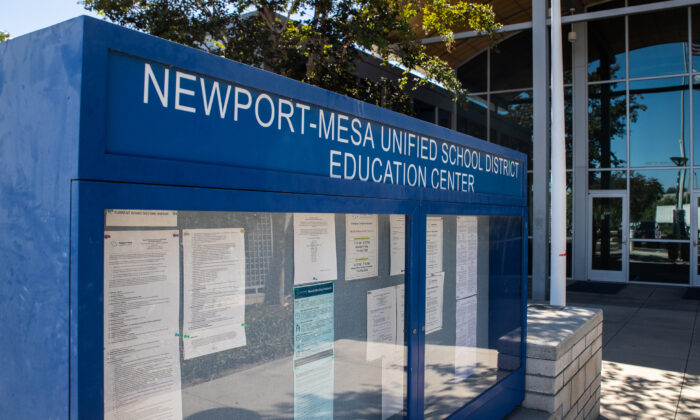 Kristen Valle, a candidate in the Nov. 8 election for the Newport-Mesa Unified’s Board of Education, is calling on the entire community to invest in its children.

Valle, 34, a sales and marketing professional who currently works for a healthcare organization, told The Epoch Times she noticed an increase in anxiety and depression among children over the past few years.

When her 16-year-old neighbor committed suicide, Valle said that’s when she decided to investigate the source of rising depression and anxiety among the younger generation.

“In our community and across the country, there are so many kids that are depressed and anxious. Kids right now are on antidepressants more than ever before and they’re committing suicide at alarming rates,” she said. “And I thought, ‘that’s not normal, what is causing something like this,’ and I started digging to find out.”

“My findings were atrocious,” she said.

Valle said she is concerned critical race theory—an ideology that divides society into oppressors and oppressed based on race—is being taught in U.S. schools.

“Their goal is to create revolutionaries through Marxist ideology,” Valle said. “There’s so much pressure on kids right now with this critical race theory and gender-inclusive curriculum. It’s too much pressure on young minds, and I think that’s what’s causing all the anxiety and depression.”

According to Valle, though lessons containing critical race theory are currently not taught in Newport-Mesa Unified, such teachings have been introduced through what is called social-emotional learning—lessons meant to teach students emotional regulation and self-awareness—which Valle called “critical race theory with a cute little bow on it.”

“I think everybody wants their children to learn social and emotional skills,” Valle said. “But that’s not what this is, it’s critical race theory being hidden.”

Valle said if elected, she would advocate for the removal of such lessons from the district’s schools.

Additionally, Valle said she’d like to put “less focus on pushing kids into a four-year college and a bigger focus on letting kids know [other] opportunities they have.”

To Valle, this means placing a bigger emphasis on the district’s existing Regional Occupation Program—which allows students to learn trades and occupational skills such as nursing, construction, automotive repair, and cosmetology, among others.

She also said she would advocate for better school safety by installing security cameras and posting “armed guards” at every campus in the district if elected.

Throughout her campaign, Valle said she had been criticized for being one of the few candidates district-wide without children.

“Just because you’re not a parent doesn’t mean that you want to watch the future of our nation be indoctrinated. I think we should, as a community, be encouraging everyone to get involved and have a say on our school board,” she said.

Valle is running against Lisa Pearson for Trustee Area 4, which covers Newport Coast, Harbor Ridge, and a portion of Corona Del Mar.