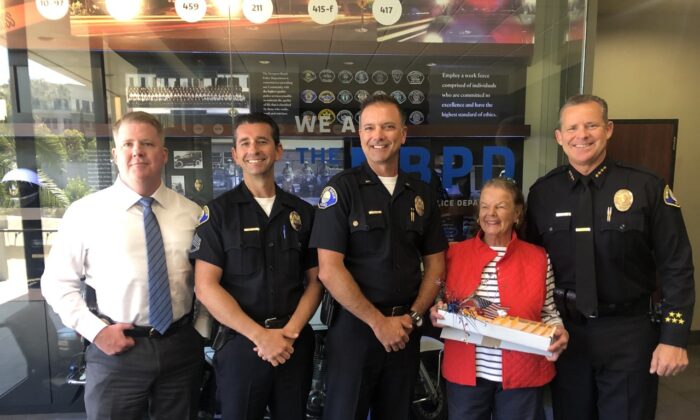 NEWPORT BEACH, Calif.—Making her way up the steep flight of stairs to the entrance of the Newport Beach Police Station on a Tuesday morning, 93-year-old former Citizens’ Academy volunteer Dotty McDonald was grinning from ear to ear.

“This is one of my favorite days of the year,” McDonald told The Epoch Times. “I just love supporting our police. I always say, ‘God, Country, and the Blue!’”

For seven years, McDonald volunteered with the department after graduating from the Newport Beach Police Department’s Citizens’ Academy in 2015 at the ripe age of 85.

Her volunteer duties consisted mainly of courtesy home checks for residents on vacation. One of her favorite jobs was checking pawn shop slips for items reported stolen.

“I’d also ride along with different police officers during the midnight shifts; those shifts were the most exciting,” McDonald said with a twinkle in her eye.

Occasionally, they would stop at Sgt. Pepperoni’s Pizza Store, a favorite local pizza joint, or grab a cup of coffee during their shift. Over the years, she became a friend and confidante to many.

“That’s how I found out it was their favorite pizza, so I decided to make it a tradition every year to bring the entire department gift cards, to show how much I love them and thank them for the work they do for our community,” McDonald said.

She spent countless hours riding along with officers, sometimes during the 7 p.m. to 4:30 a.m. shift, sharing meals and becoming a shoulder to lean on during the lonely hours on patrol.

“We’d discuss private affairs. I think they looked at me like a mother or a grandmother that they could confide in,” McDonald said.

Despite her recent retirement from the volunteer corps, she keeps in touch with many of the officers she worked with over her years of volunteering. She thinks of them as extended family, and they feel the same, inviting her to weddings, birthdays, and life milestones.

This year, McDonald raised more than $12,000 in order to purchase restaurant gift cards that will help feed the police officers during the tough summer shifts she knows all too well.

She said she always picks a day close to the Fourth of July, knowing that the holiday weekend is one of the longest, busiest, and most hectic times of the year.

On July 5, she proudly turned over a box of 250 cards for $35 each to Lewis. She beamed as she told Lewis that another 150 cards for $40 each from Chick-fil-A and Chipotle would be dropped off later in the week.

“I can never get over Dotty’s boundless energy and generosity,” Lewis told The Epoch Times. “Especially these days, with a busy Fourth of July behind us, this gesture of goodwill and appreciation goes a long way amongst all the officers and staff.

“We’re a close-knit department. These [gift cards] help us in other ways besides feeding the team. Every single person who receives one of these cards gets the message that they are appreciated and play a key role in our success serving the public 24 hours a day, 365 days a year.

“Dotty is very special to us; she really is an inspiration. It’s never too late to make a difference.”

After her husband of 51 years, Hank, died in 2015, McDonald said she had to keep her mind and body busy.

The 12-week hands-on course was exactly what the then 85-year-old retired nurse was looking for, and she relished working alongside police personnel to learn about everything from SWAT operations to the department’s K-9 Program, CSI, dispatch, narcotics, traffic laws, firearms, and detective investigations.

“I fell in love with the program and the people,” McDonald told The Epoch Times. “It made me young again. Literally, because sometimes I had to run to keep up with the officers.”

As soon as she completed the academy courses, McDonald was asked if she would like to become a regular volunteer, and she jumped on the offer.

McDonald logged thousands of volunteer hours with the department, doing everything from conducting vacation home checks to her favorite task, scrutinizing pawn shops for stolen valuables.

A few years ago, she decided she wanted to do something special on the Fourth of July for the hardworking men and women of the department, whom she had gotten to know and love.

“I love our military and police, and I love the American flag, so the Fourth of July felt right,” McDonald said when asked about the timing.

McDonald, who will turn 93 in August, says she’ll continue to raise money for the gift cards each year as the Fourth of July rolls around.

“I know they [the officers] are appreciative, but it’s all of us—the community they protect—who have a duty to show them how much we appreciate what they do for us day-in and day-out,” she said. “This is just my little way of letting them know we care about them, that we have their backs. With everything going on in the world, I think it’s important to show them the love and respect they deserve.”