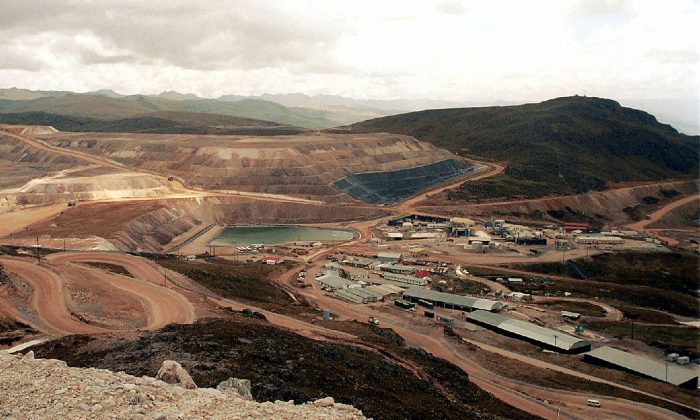 An undated picture of the gold mine Yanacocha, in Cajamarca, 621 miles (1000 kilometers) northeast of Lima, Peru. The biggest gold mine in Latin America, located in the north of Peru, has been crippled by protests from locals who believe activity there has polluted the water supply. Production at the mine, which is run by a subsidiary of U.S. mining group Newmont, the Yanacocha company, was suspended on Aug. 29, 2006. (STR/AFP/Getty Images)
Companies

Newmont Mining Corp. said on Jan. 14 it would buy smaller rival Goldcorp Inc. for $10 billion, creating the world’s biggest gold producer in the face of dwindling easy-to-find reserves of the precious metal.

The transaction, the biggest ever takeover in the gold sector according to Refinitiv, follows Barrick Gold Corp.’s agreement in September to buy Randgold Resources Ltd. in a deal valued at $6.1 billion.

“Combining forces will give us the sector’s best project pipeline and exploration portfolio,” Newmont Chief Executive Gary Goldberg said on a conference call with analysts. “These prospects translate to the gold sector’s largest reserve and resource base.”

In recent years, investor criticism over inadequate management of capital had largely kept gold companies focused on costs while dampening enthusiasm for acquisitions. But the need to bolster shrinking reserves and production and a rising gold price are now serving as catalysts for increased dealmaking.

Spot gold prices are up 11.3 percent since an August trough, when they had declined 15 percent from a January 2018 peak.

Newmont’s acquisition of Goldcorp could spark further consolidation in the industry, where too many gold companies are chasing too few assets, Michael Siperco from Macquarie Research said. He did not specify which companies are most likely to follow suit.

The new company, to be called Newmont Goldcorp, is set to overtake current leader Barrick Gold’s annual production and will have mines in the Americas, Australia, and Ghana.

“This transaction is positive for Newmont, because it establishes it as the world’s leading gold producer with a deal that is accretive on nearly all key metrics,” analysts at Scotiabank wrote in a note.

The new company will be led by Newmont’s Goldberg. He will retire at the end of 2019, when Tom Palmer, Newmont’s chief operating officer, will take over as the CEO, the companies said.

Denver, Colorado-based Newmont expects savings of $100 million a year. The combined company will sell $1 billion to $1.5 billion worth of assets over the next two years as part of the deal, mirroring a similar move by Barrick when it announced the Rangold acquisition.

The new company is expected to produce 6-7 million ounces of gold annually over the next 10 years and beyond versus Barrick’s 2018 forecast of between 4.5 million and 5 million ounces.

That remains below premiums paid in the last decade for gold deals, Credit Suisse analysts said in a note.

The transaction is scheduled to close in the second quarter, the companies said.