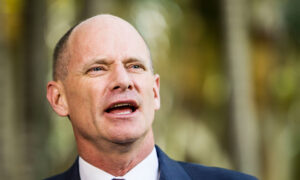 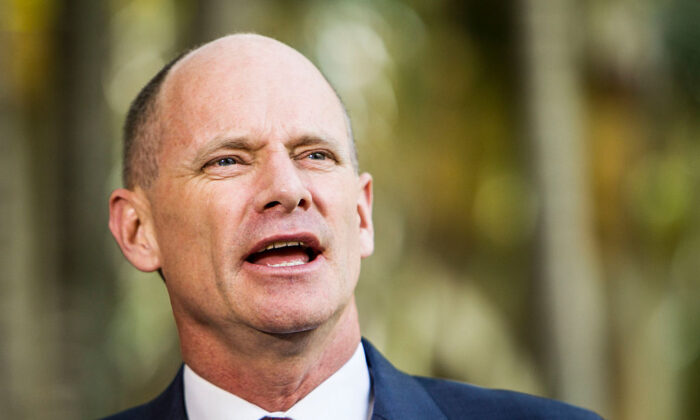 BRISBANE, Australia—Former Queensland Premier Campbell Newman has joined forces with the Liberal Democrats to run for the federal Senate.

Newman, who was premier from 2012 to 2015, quit the Liberal National Party at the end of the state conference by issuing a statement two weeks ago saying that the Coalition had failed to honour the spirit of individual freedom that is “at the heart of not only Liberal Party values, but wider Australian values.”

He has spent recent months panning COVID-19 lockdowns, which he says are supported by both major parties.

“Australia needs real leadership. Strong, sensible, balanced leadership. Leadership that is brave enough to stand up to the powerful elites and bureaucrats who so casually sacrifice our freedoms,” Newman said in a statement on Sunday.

The Sky News commentator declared his political career over six years ago, but said he has recently been approached by supporters calling on him to return to politics.

Newman, who was Brisbane Lord Mayor from 2004 to 2011, has promised to hold both major parties’ “feet to the fire” because they are letting voters down.

The former premier, whose parents were both senior ministers in coalition governments, accused Australian Prime Minister Scott Morrison of abandoning Liberal party ideals of small government during the pandemic.

“Scott Morrison has, sadly, let us down with very illiberal big government over-reach,” he said.

“(Labor leader) Anthony Albanese represents outdated socialism that will saddle our kids with huge debt and destroy our culture with woke nonsense and red tape.

“We need a return to real leadership and strong, sensible government.”

Newman served for 13 years in the Australian Army before working as a consultant until he was elected as Brisbane mayor.

“Despite relentless attacks from Labor, and little defence from the self-obsessed LNP, he remains extremely popular with a large proportion of the community who appreciate his ‘can do’ attitude, the achievements of his years in government and his commitment to traditional Aussie values and real leadership,” Humphreys said.

“Make no mistake. This is just the beginning. The party that was founded 20 years ago and that has been consistently dedicated to the principles of small government and personal liberty, is about to do a whole lot more.”

LNP Leader David Crisafulli did not want to comment on Newman’s announcement saying the party had charted a “strong and united” course two weeks ago.

“Mr Newman has chosen to go in a different direction, and I don’t wish him any ill,” he told reporters.

The federal election must be called before September 2022.