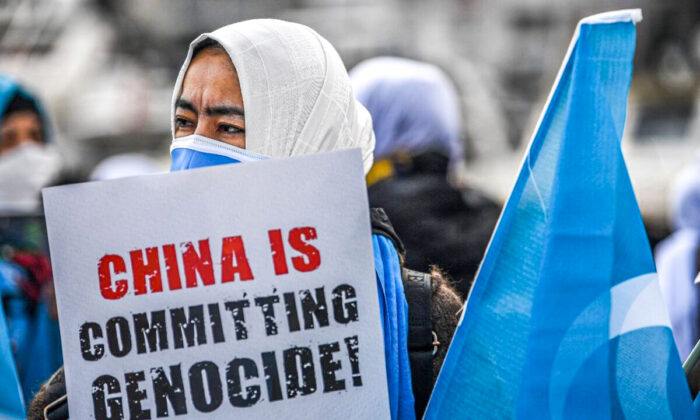 Members of Women Muslim Uighur minority hold placards and flag of east Turkestan as they demonstrate to ask for news of their relatives and to express their concern about the ratification of an extradition treaty between China and Turkey, near China consulate in Istanbul on March 8, 2021 during a International Women Day. (Ozan Kose/AFP via Getty Images)
China Human Rights

“The Xinjiang Papers, Explained”, published on Nov. 27, is an expanded look at the original “Xinjiang Papers”, a set of classified Chinese documents leaked to the New York Times in 2019. The new report presents a more complete explanation of these papers, and also includes new documents not covered by the Times.

The newly leaked source documents were authenticated and analyzed by China scholars Adrian Zenz, James Millward, and David Tobin. The report was produced by the Uyghur Tribunal, a London-based people’s tribunal, who chose to publish only excerpts and analysis of the papers, not complete documents, to protect the source of the leak.

Since 2014, Uyghurs in Xinjiang have been living under strict controls that many observers and some Western governments, including the United States, have called a genocide. Human rights groups have reported restrictions on the practice of Islam, forced relocations, slave labor, forced abortions and forced sterilization of Uyghur women, and the detention of more than a million Uyghurs in the biggest internment camps on earth.

The Chinese regime has repeatedly denied all allegations of human rights abuses in Xinjiang, and claims that its camps are education centers designed to combat separatism and stop Islamist terrorism in the region.

In 2019, the New York Times published the first batch of leaked documents, detailing China’s organized persecution of the Uyghurs.

The newly published report shows much stronger links between official Chinese policy and the oppression in Xinjiang. According to Zenz, the connection between Chinese Communist Party (CCP) ideology and the abuses against the Uyghurs “are much more extensive, detailed and significant than previously understood”.

Zenz writes, “these documents reflect a much more draconian approach to bring the region’s ethnic groups under control.” The new documents show “direct evidence about the importance of the re-education camps and the need to intern substantial shares of the population.”

In one leaked speech, Xinjiang CCP chief Chen Quanguo emphasizes “rounding up all who should be rounded up” to control the Uyghurs and fulfill the will of Beijing.

Taken together, these documents show that China’s campaign against the Uyghurs has been planned and directed by the highest levels of the CCP. The Chinese regime seems to be openly committing genocide, justified by a national racial policy.

The Crime of Genocide

According to the 1948 United Nations (U.N.) Genocide Convention, genocide is a crime defined as “acts committed with intent to destroy, in whole or in part, a national, ethnic, racial, or religious group.” Genocidal acts listed by the U.N. include mass killings and torture based on ethnic or racial identity, economic and environmental deprivation based on group identity, and “imposing measures intended to prevent births within the group.”

In 2019, the Xinjiang Papers showed the world that many of these criteria had been met by China’s actions against the Uyghurs. The newly published report appears to show something more: genocidal intent by the highest levels of the Chinese regime.

Under international law, responsibility for genocide extends to those who plan, instigate, or order these acts—not just to those who carry them out. Encouraging genocidal actions is itself a crime, and any person who “directly and publicly incites others to commit genocide” is in violation of international law.

According to this latest addition to the Xinjiang Papers, Xi and other top Chinese leaders seem to have done exactly that.

For example, in one of Xi’s leaked speeches, the Chinese leader points out that “population proportion” was an important foundation of national stability—a reference to the ethnic makeup of Chinese society. In 2020, this statement by Xi was quoted by a Xinjiang CCP official, in support of the idea of boosting the population of Han Chinese, the dominant ethnic group in China, in Xinjiang, including a plan to move 300,000 Han Chinese to Xinjiang by 2022.

In another speech, Xi uses the analogy of treating a disease to refer to the Uyghur problem. “We propose that Xinjiang is currently in a painful period of interventional treatment.” In other documents, Xi notes that terrorists can “multiply like cancer cells” and that communist re-education camps are like China’s free medical treatment for “sick thinking”.

Other documents show various aspects of the CCP’s obsession with changing the “severe imbalances in the distribution of the ethnic population” in Xinjiang.

According to Zenz, these leaked documents show a direct link between the policies in Xinjiang and the genocidal intentions expressed in speeches by Xi and other top CCP leaders.

Why is China oppressing the Uyghur people? Why tarnish China’s international standing with a potential genocide?

The purpose, as with so many things the Chinese regime does, seems to be to keep the CCP firmly in control.

According to documents in the new report, Xi sees the Uyghur population as a major threat to the rule of the CCP, even claiming in a speech that China’s national security and economic success is endangered by the situation in Xinjiang.

The underlying problem is easy to understand: the Uyghurs aren’t Chinese. They’re Muslims who have more in common with Turks and the peoples of Central Asia than they do with China’s ethnic Han majority. And there are 12 million of them, about half the population in Xinjiang, China’s largest region.

Though this isn’t a new problem. There has been an active separatist movement among the Uyghurs since at least 1765, when their Ush Rebellion led to the massacre of an entire Uyghur city by the Qing army. Uyghur separatist thinking continues to inspire acts of political violence today, and even played a small role in the 9/11 story.

Following the 2001 terrorist attacks, the U.S. launched its “global war on terror” targeting extremist groups around the world. When the U.S. applied official “terrorist organization” status to Afghanistan’s Eastern Turkistan Islamic Movement (ETIM), that small group of Uyghur extremists suddenly became the declared enemies of the U.S. Some captured Afghan Uyghurs even ended up imprisoned in Guantanamo Bay.

China took the opportunity to find ETIM activity in Xinjiang, and used it to justify large-scale repression of Uyghurs in the name of fighting terror. Uyghur separatists were redefined from a domestic problem into part of the global terrorist threat.

The United States removed ETIM from its list of terrorist organizations in 2020.

China’s recent treatment of Uyghurs seems to have two goals: to change Uyghurs culturally, and to reduce their numbers.

By their own admission, the CCP wants to turn the Uyghurs into good communists, by force. This involves suppression of religious practices, political repression, and long stays in political re-education camps for hundreds of thousands of Uyghurs.

The other part of the Chinese plan, less readily admitted by the CCP, is to reduce the number of Uyghurs—both in real terms (through forced birth control), and in proportion to Han Chinese (by bringing Han Chinese to Xinjiang).

While these actions may strengthen the CCP’s grip on Xinjiang, the Chinese regime may be putting itself at risk of serious international sanctions for its crimes against humanity.