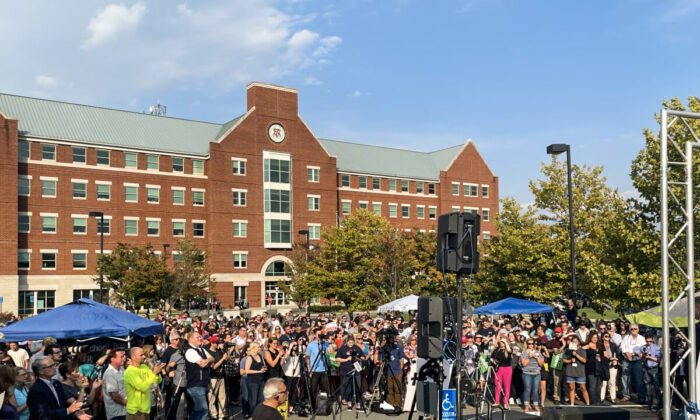 Virginia’s newly-elected Attorney General Jason Miyares on Thursday said that he plans to investigate the alleged sexual assaults in Loudoun County Public Schools and will develop new legislation granting his office the power to intervene when prosecutors are not doing an adequate job.

Speaking at a press conference alongside Loudoun County Sheriff Mike Chapman just two days after the election, Miyares responded with a simple “yes” when asked by a reporter if he plans to investigate the sexual assault issue in Loudoun County Public Schools.

“We’re obviously aware of some pretty horrific cases that have made the public, where they failed to do their job. And if there’s anything that I want to bring back to the forefront in this process are the victims,” Miyares said.

“As a former prosecutor, those are the individuals that you remember—the victims,” he said. “I don’t remember the defendants much and so that’s been a little bit of my frustration that I’ve seen as I think the victims have been forgotten. And when prosecutors are making plea deals on child rape cases, over the objection of the family, I have a serious problem with that. So, we’re going to have a legislative fix on that.”

Loudoun County Commonwealth’s Attorney Buta Biberaj said she welcomed Miyares’ involvement in investigating the alleged assault cases from Loudoun County Public Schools while stressing that her office had been provided with only limited information regarding the investigation.

“I am confident that any investigation will show that our office handled those matters appropriately and that the only limitations that will be identified will be in how information was given to us,” Biberaj said.

“Loudoun County elected me to ensure that we are always having a fair and just system and also to direct our resources towards stability in our community by approaching cases that deal with mental health, addiction, and poverty, differing from those that are violent,” Biberaj continued.

“If the attorney general-elect wishes to sit down and discuss how I represent my community, I welcome him to call me any day,” she said.

The Loudoun County Public Schools system has come under fire in recent months over its lack of transparency and failure to take appropriate actions after it was revealed that a student who allegedly sexually assaulted another student was transferred to another high school, where he proceeded to sexually assault a second student.

The first alleged assault occurred on May 28 at Stone Bridge High School, in Ashburn, according to the Loudoun County Sheriff’s Office. Deputies said school staff notified a school resource officer about a possible sexual assault against a 15-year-old girl. According to the victim’s family, the assault happened in a girls’ bathroom by a young boy who was allegedly wearing a skirt.

That boy was later arrested in the case and charged in juvenile court with two counts of forcible sodomy, authorities said in a statement.

According to a release from the sheriff’s office, a 15-year-old male forced a female student into an empty classroom, held her against his will, and touched her inappropriately. The boy was charged with sexual battery and abduction of a fellow student.

On Oct. 25, Loudoun County Juvenile & Domestic Relations Court Chief Judge Pamela Brooks found the evidence against the accused teenager to be sufficient for a finding of guilt.

The teenager is scheduled to appear in court on Nov. 15, as per The Loudoun Times.

Meanwhile, Superintendent Scott A. Ziegler last month told a news conference that the school system, “will have alternative placements for students involved in discipline infractions that protect the safety of the student body and the rights of the accused,” and apologized for the school district’s handling of the sexual assault allegations, The Washington Post reports.

“Let me say to the families and students involved: My heart aches for you, and I am sorry that we failed to provide the safe, welcoming, and affirming environment that we aspire to provide,” Ziegler said.