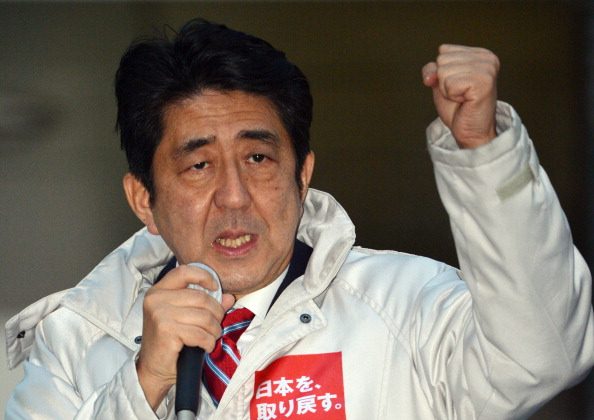 Japan’s conservative Liberal Democrats won in a landslide victory during this weekend’s elections, giving Shinzo Abe, who has said he will take tougher measures against China in securing Japanese territories, another chance as prime minister, according to exit polls.

Abe, an outspoken Japanese nationalist who supports revising a war-renouncing provision of the Japanese Constitution, already served as prime minister from 2006 to 2007.

Five years ago, Abe resigned abruptly—as many Japanese prime ministers have done—but says that at the time, he “was nervous and under pressure,” The Japan Times reports.

“I achieved some results, but I could not continue more than one year. This time, I will create a steady government,” he said.

Abe said that he would “stop the challenge” presented by the Chinese regime in claiming the Senkaku Islands in the East China Sea according to the BBC.

“China is challenging the fact that (the islands) are Japan’s inherent territory,” Abe said, reported AFP. “Our objective is to stop the challenge,” he said.

Following violent protests against Japanese interests in China this year, some Japanese businesses pulled out of China.

Recently, China sent a government aircraft over the Senkakus, prompting Japan to deploy F-15 fighter jets. And before that, Chinese patrol ships were sent to the islands on several occasions, which also forced Japan to send its coast guard vessels to the area.

Abe also said that he would make an attempt to pull Japan out of deflation.

“When our party was in power, we were one step away from overcoming deflation,” Abe said, according to the Yomiuri newspaper. “Based on this, we will, without fail, lift the country out of deflation by implementing three policies–a more powerful financial policy, fiscal policy and growth strategy.”