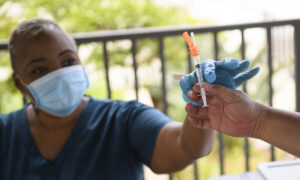 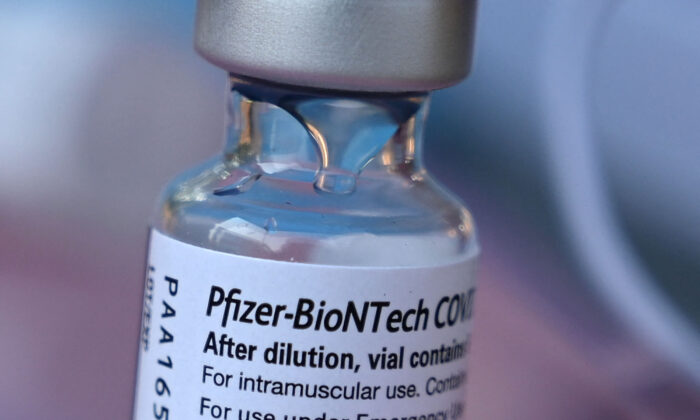 Newly Approved COVID-19 Vaccine Not Yet Available in US

The first COVID-19 vaccine approved for use in the United States is not available yet and it’s unclear when the first doses will be ready for administration.

The Food and Drug Administration (FDA) on Aug. 23 approved a vaccine from Pfizer and its German partner, BioNTech. But at the same time, drug regulators extended (pdf) emergency use authorization (EUA) for existing doses of the vaccine.

The FDA and the Centers for Disease Control and Prevention (CDC) declined to answer or did not respond to questions about when the approved vaccine, dubbed Comirnaty, would be available.

Pfizer did not answer directly when asked and BioNTech did not return an inquiry.

But health officials from states across America confirmed to The Epoch Times that they do not have any Comirnaty doses, and that none are expected soon.

“Comirnaty-labeled doses are not yet in circulation in the U.S. yet,” a spokesman for the Arizona Department of Health Services told The Epoch Times in an email.

“There is no timeline for when the branded product will start to be shipped,” a spokeswoman for the Tennessee Department of Health added.

An official in Massachusetts said that the approved doses are not likely to be distributed until October, at the earliest.

The authorized doses were already produced. The approved doses are ones produced in the future.

Approval requires a higher threshold of proof of safety and efficacy than authorization.

Both vaccines are made by Pfizer and BioNTech.

The companies’ product has been distributed in Europe under the Comirnaty brand for months.

Hundreds of Millions of Doses Left

States and the federal government have plenty of the existing vaccine left.

Oklahoma, for instance, had more than 210,000 doses of the Pfizer vaccine on hand as of Aug. 30, a spokesperson for the state’s health department told The Epoch Times via email.

Pfizer is one of three COVID-19 shots being administered in the United States.

The United States bought 300 million doses of the Pfizer vaccine before purchasing an additional 200 million doses in July. As of Sept. 2, just 211 million of those had been administered.

“The federal government has a large amount of the originally-labeled vaccine to be distributed before the branded product is released,” the Tennessee spokeswoman said.

Denise Hinton, the FDA’s chief scientist, wrote in the letter extending the authorization for existing doses that “there is not sufficient approved vaccine available for distribution” to all of the adults 16 years or older in the United States while there is “a significant amount” of the EUA doses.

A Pfizer spokesperson told The Epoch Times via email that the EUA product will be shipped and used until its expiry date, provided the proper storage conditions are maintained.

Some states indicated they will not maintain a separate count of those who receive the approved vaccine and those who have gotten the EUA version. A number of officials appeared to be unaware that there was any legal difference between the existing doses and those that fall under the approval.

Dr. Janet Woodcock, the FDA’s acting commissioner, touched on the matter in a phone call with reporters on Aug. 23. She said that “while production of the approved vaccine product is underway, the FDA approved vaccine and the EUA authorized vaccine have the same formulation and can be used interchangeably.”

There are no safety or efficacy concerns with doing so, officials say.

A footnote in the letter states the vaccines “are legally distinct with certain differences that do not impact safety or effectiveness.”

The FDA declined to answer when asked what that meant.

The Pfizer spokesperson said it refers to the differences in manufacturing information included in the submissions for authorization and approval.

“Specifically, while the products are manufactured using the same processes, they may have been manufactured at different sites or using raw materials from different approved suppliers,” the spokesperson said.

The company declined to share whether the same manufacturers that produced the EUA vaccine will produce the new doses.

Dr. Peter Marks, the director of the Center for Biologics Evaluation and Research at the FDA, told reporters last week that the approval process included inspecting facilities where the vaccine is being manufactured as well as reviewing thousands of pages of data and information concerning safety, effectiveness, and manufacturing quality.

The FDA on Aug. 23 sent two separate letters, one outlining the EUA extension and the other telling BioNTech that new doses of its vaccine were approved.

The process “has caused a great deal of confusion,” Sen. Ron Johnson (R-Wis.) wrote in a letter to Woodcock last week.

He accused the FDA of rushing the approval process because Comirnaty isn’t generally available at this time.

“There is no doubt that the FDA’s action will lead to more vaccine mandates and increased pressure on those currently choosing not to get vaccinated,” Johnson wrote.

“If there is insufficient supply of Comirnaty vaccines for those succumbing to the coercion of mandates, isn’t the FDA de facto endorsing vaccine mandates utilizing EUA vaccines?” he added later.

The FDA has not yet responded to the senator’s questions, a spokesperson told The Epoch Times in an email.

A number of jurisdictions and agencies announced new vaccine mandates in the wake of the approval, with many officials citing the approval as impetus for the requirements.

“Is it unusual to allow people to use the vaccine that was produced, up until this approval last week, under an EUA now that it’s approved? I don’t think there’s any reason not to,” Dr. Sidney Wolfe, founder of the Public Citizen’s Health Research Group, told The Epoch Times.

Federal law dictating the regulation of biological products such as vaccines can be read as preventing approval of doses that were authorized under EUA, Dr. Roger Klein, a policy adviser to The Heartland Institute who has advised the FDA, added.

“They’re not going to offer a retrospective approval,” he told The Epoch Times. “I don’t think that’s unusual. It isn’t, quite frankly, a reason in my view to be concerned.”

The FDA did not answer questions as to why the agency approved future doses and authorized existing ones.

“I think they took an appropriate amount of time,” Wolfe said.

“They sort of missed the party, given that so many hundreds of millions of doses of these vaccines have been given out,” Klein said.

The approval was only for those 16 or older. The vaccine remains under EUA for children between the ages of 12 and 15. It also only has EUA, not approval, for booster shots for certain people 12 and up with compromised immune systems.

FDA officials discouraged doctors from giving the vaccine to children 12 and under, a population in which its effects are still being studied.

There have been claims, meanwhile, that the EUA vaccine and the approved one are treated differently in terms of liability.

Both forms of the vaccine fall under the Public Readiness and Emergency Preparedness Act, because then-Health Secretary Alex Azar in March 2020 issued a declaration, per the act, to give immunity to manufacturers of COVID-19 countermeasures unless they engage in willful misconduct.

“The government encourages the production of vaccinations and medications used to fight a pandemic like COVID-19 by protecting the companies making them from lawsuits,” Mark Sadaka, a medical litigations lawyer, told The Epoch Times.

Nearly 1,700 claims related to COVID-19 countermeasures, including 686 related to vaccines, were filed as of Aug. 2, but only two have been reviewed and decided on. Both were rejected “because the standard of proof for causation was not met and/or a covered injury was not sustained,” the program’s webpage states.

The Health Resources and Services Administration, which runs the program, told The Epoch Times that they’re working on processing claims as quickly as possible.

“For the majority of COVID-19 countermeasure claims, including COVID-19 vaccine claims, the CICP is still waiting for records and documentation to be submitted,” a spokesman said in an email.

Requesters must demonstrate proof that an injury or death occurred as a direct result of the administration or use of a countermeasure like a vaccine.