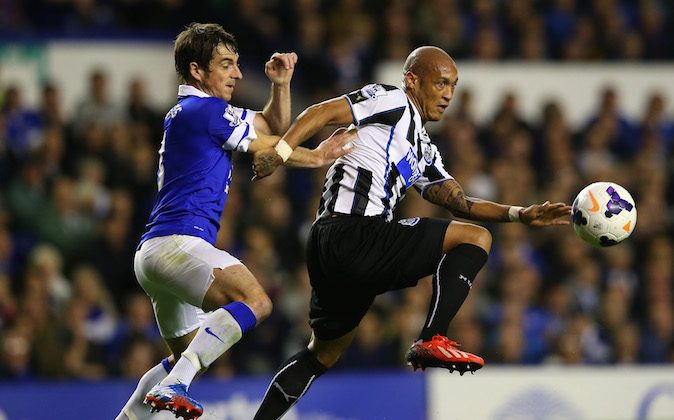 Leighton Baines of Everton battles with Yoan Gouffran of Newcastle during the Barclays Premier League match between Everton and Newcastle United at Goodison Park on September 30, 2013 in Liverpool, England. (Photo by Julian Finney/Getty Images)
Soccer

The game will be broadcast on Premier League Extra Time and Directv in the United States.

Given Arsenal’s predicament, Everton manager Roberto Martinez’s claim that the race for fourth is far from over doesn’t look so fanciful after all.

Everton is eight points behind Arsenal, but has a game in hand over the Gunners and hosts them at Goodison Park on April 6.

If Everton beats Newcastle on Tuesday and Arsenal fails to win against Swansea, the gap between the clubs is very makeable. Tottenham currently separates the pair, two points ahead of Everton but having played a game more.