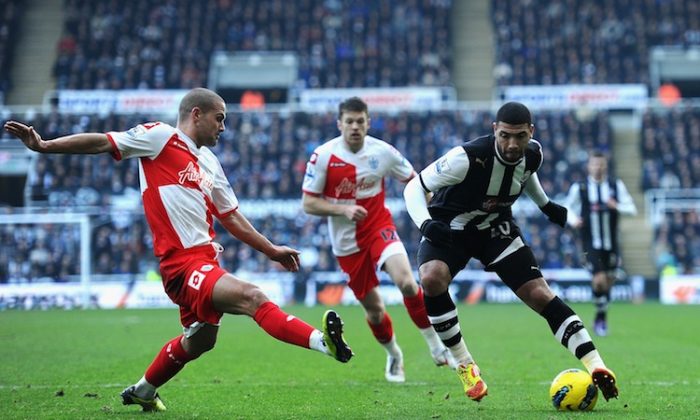 New QPR boss Mark Hughes didn't get the result he was looking for against Newcastle on Sunday. (Laurence Griffiths/Getty Images)
Soccer

Newcastle Back Into Top Six

Newcastle United leapfrogged Liverpool to claim sixth place in the Barclays English Premier League with a hard fought 1–0 home win on Sunday over Queens Park Rangers, who remain in the bottom three.

This was a fascinating encounter, with Mark Hughes having just replaced the sacked Neil Warnock at Loftus Road. However, the eagerly awaited return of “bad boy” Joey Barton to the Sports Direct Arena (St James’ Park for the purists) was put on hold as the feisty Rangers skipper was suspended.

Newcastle was also missing key players with in-form striker Demba Ba and midfield dynamo Cheik Tiote representing Senegal and Ivory Coast respectively at the African Cup of Nations. That meant a start for Leon Best up front, while Danny Guthrie was given an opportunity to show what he can do in the middle of the park.

Keen to give their new boss a winning start, Rangers started brightly with Newcastle’s Tim Krul the busier of the two goalkeepers in the first quarter of an hour. In fact Krul was fortunate that a couple of uncharacteristic rebounds fell kindly for his defenders rather than to the feet of opposing forwards.

Then on 16 minutes, the lively Shaun Wright-Phillips let fly from the left hand corner of the penalty area only to see his fierce drive just clip the top of the crossbar and sail into the stands.

In fact the visitors more than held their own for the first half hour as Newcastle could not quite seem to get into gear. Jay Bothroyd was unlucky when his shot grazed Krul’s left-hand upright in the 32nd minute and at this juncture Rangers were certainly not looking like a side in the bottom three.

However, the introduction of Hatem Ben Arfa for the injured Yohan Cabaye turned out to be the injection of creativity the Magpies needed. Full of confidence following his last gasp wonder goal to defeat Blackburn in the FA Cup last week, Ben Arfa’s ability to find the incisive pass began to cause Rangers problems.

On 37 minutes, Best received the ball just inside the Rangers area. Showing the crowd some of the clever footwork of which he is capable on a good day, the striker stepped blithely inside Luke Young and slotted the ball home. Rangers could consider themselves unlucky to be going into the break a goal down, as they had really been the better side for much of the half.

Newcastle carried on in the second half as they ended the first, and for the most part put in a much more solid performance for manager Alan Pardew. Rangers’ chance to take something from the match came when Bothroyd squandered a couple of decent opportunities in quick succession.

As it was, there would be no winning start for Hughes who is going to have to quickly find a way to put some points on the board if he is to keep QPR in the top flight.

What Future for Rangers?

The long suffering QPR fans are desperately hoping that Malaysian entrepreneur Tony Fernandes will provide the injection of cash and vision to make the Super Hoops a competitive Premier League side and bring back the nearest thing they ever had to “glory days” in the mid to late ’70s.

Back then, Dave Sexton assembled a magnificent side that was pipped for the championship by just a single point on the last day of 1975–76 season.

Yours truly was resident in London during the 1976–77 season along with a few friends who were also interlopers to the capital with no local loyalties. You might reasonably have expected us to go and watch Arsenal, Spurs, Chelsea, or West Ham, yet our first choice destination was always Loftus Road.

Stan was one of those wonderfully gifted players who was somehow never given a decent run in the England side when he was clearly the outstanding talent in the country. Any other country would have built their national team around the guy instead of complaining that he “didn’t tackle back enough” and refusing to pick him unless absolutely desperate.

Stan’s off-field exploits almost rivaled those of George Best, or Joey Barton to give a contemporary example—which admittedly did not help his cause—but his football skills were sublime and a joy to behold. Mark Hughes does not yet have that sort of quality to work with, but it is certainly going to be interesting to see how the club develops in the months to come.