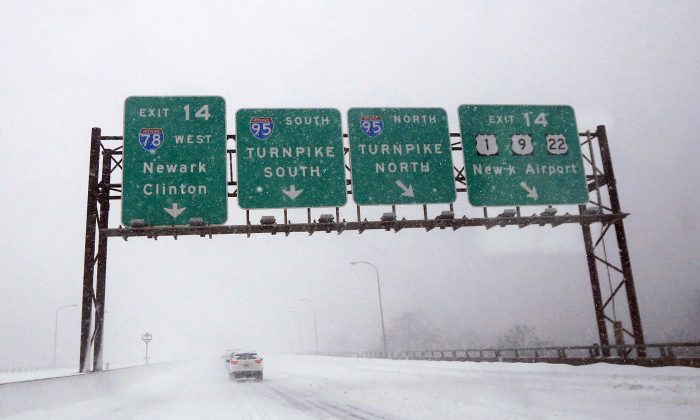 A vehicle drives on the I-78 extension of the New Jersey Turnpike during a snowstorm, Saturday, Jan. 23, 2016, in Newark, N.J. Towns across the state are hunkering down during a major snowstorm that hit overnight. (AP Photo/Julio Cortez)
US

The mayor of Newark, New Jersey says residents should stay inside until further notice.

The travel ban was initially imposed on Saturday night due to heavy snowfall from Winter Storm Jonas.

Mayor Ras Baraka announced on Sunday morning that the ban had been extended “until further notice.”

“Although we cautioned residents beginning on Friday about venturing out into the hazardous conditions caused by the snowstorm, many disregarded these appeals yesterday and brought their cars out onto the street and got stuck in the snow,” he said in a statement.

“This has impeded fire, police and other emergency vehicles and hampered snow plow operations as a result. We are asking all Newarkers to refrain from going out so that we can continue the task of clearing streets and moving our emergency vehicles.”

Any private vehicles that are found blocking streets will be towed and ticketed as necessary.