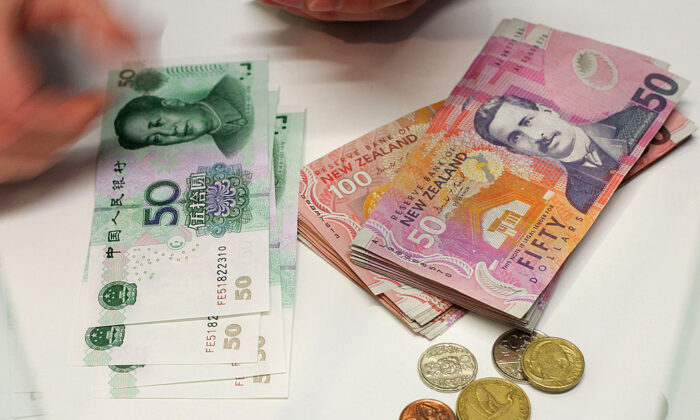 A currency exchange teller counts out Chinese Yuan alongside a stack of New Zealand dollars and coins in Auckland, New Zealand, on 21 April, 2007. (Dean Treml/AFP via Getty Images)
Asia & Pacific

The two major parties of New Zealand, the Labour Party and the National Party, are embroiled in a political donation fraud scandal after it was revealed that seven people were involved in making illegal and deceptive donations to both parties.

Parties must report details of all political donations over $15,000 (US$9,000) in New Zealand, but these donations were split among numerous fake donors to bypass the disclosure limit.

Former National MP Jami-Lee Ross, Auckland businessmen Zhang Yikun, twin brothers Zheng Shijia (Colin) and Zheng Hengjia (Joe), as well as three others who the court has allowed to have their names suppressed, have been taken to court by the SFO. All have pleaded not guilty to charges of deception.

Investigations began in 2018 when Ross blew the whistle on the party leader at the time, Simon Bridges, about a $100,000 donation after failing to secure a top job.

Ross accused Bridges of being a corrupt politician and went to the police with audio recordings of Bridges discussing fundraising. However, after investigations, the SFO ended up charging Ross instead.

Zhang and the Zheng brothers are accused of being involved with both donation deception cases.

Zhang is the founder of Chao Shan General Association and a wealthy property developer who moved to New Zealand in 2000.

He is alleged to be the true donor of all three donations, while the Zheng brothers and the three with name suppressions, of which two are Labour members, are alleged helpers of the process.

Zhang was named a Member of the New Zealand Order of Merit in the Queen’s birthday list in 2018 with support from both parties.

In a statement in 2017, Zhang said he was no longer a member of the Chinese Communist Party, and he had renounced his Chinese citizenship.

SFO prosecutors argue that in 2017, Zhang agreed to purchase five paintings from a Labour party fundraiser for $60,000.

However, the payment was split into five smaller transactions under five different fake donor names.

The court has heard details of how the Zheng brothers and the three whose names are under suppression, helped facilitate and covered up the deal.

Details were also revealed in court about another fundraiser, where Zhang purchased a Chinese imperial robe for around $100,000 as another donation to the Labour party.

However, Crown prosecutors decided not to prosecute this transaction because the purchase price was allegedly lower than its actual value of around $300,000, giving the party less than what it was worth.

Following the donations to Labour, Zhang met with Ross in 2017, who was a key liaison with the New Zealand Chinese community for the National party.

The donations were revealed after Ross and Bridges had a falling out. Ross’s ex-wife Lucy Schwaner told the court that Ross had “felt betrayed by Simon [Bridges], he was angry with him.”

The hearing into the donation case trial continues.