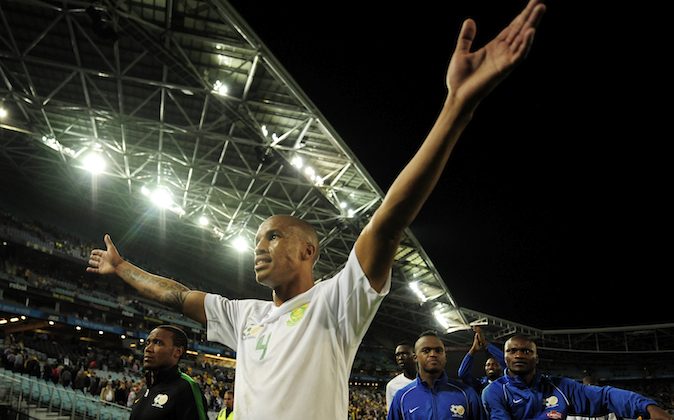 Benett Thabo Nthethe of South Africa acknowledges the crowd during the International Friendly match between the Australian Socceroos and South Africa at ANZ Stadium on May 26, 2014 in Sydney, Australia. (Photo by Brett Hemmings/Getty Images)
Soccer

The New Zealand vs South Africa soccer international friendly match is set for Friday, May 30.

The game will stream live on Sky Sport 3 NZ in New Zealand.

The game will also air on SABC 1 in South Africa.

Gordon Igesund’s South Africa side held World Cup-bound Australia to a 1-1 draw in Sydney on Monday.

Ayanda Patosi gave the visitors the lead before a Tim Cahill header drew the Socceroos level.

Igesund felt that the draw was a fair result for his team and praised his players for the spirit they showed at ANZ Stadium.

“We both had chances and I think the score was a fair reflection of the game,” he told the press.

“We conceded a goal we shouldn’t have but the game was played in the right spirit. I think we deserved to get something out of the game and we did.”

Ajax midfielder Thulani Serero played impressively for South Africa, and is sure to be a threat again at Mount Smart Stadium in Auckland.

New Zealand interim coach Neil Emblen hopes that his young team can perform well against South Africa, who have won all five previous meetings between the nations.

The average age of New Zealand’s squad for the friendly is just over 23 years. Stuttgart forward Marco Rojas and PEC Zwolle’s Ryan Thomas are in the squad and will surely pose problems for South Africa.