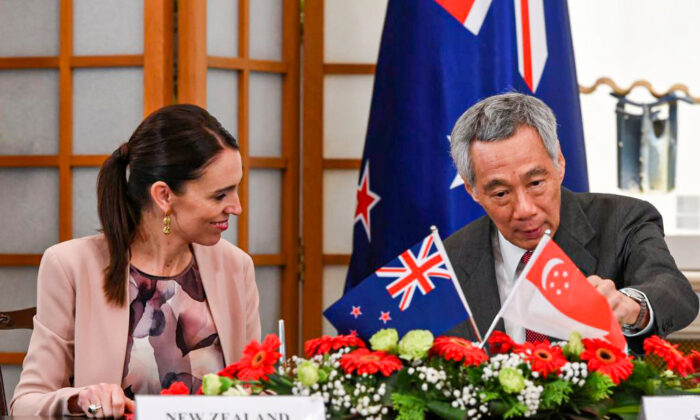 Ardern is hoping to promote New Zealand tourism and education in the two Asian nations and support local businesses rebuild and grow connections in both markets.

“This is a chance to be out there talking about the fact that New Zealand is open,” Ardern told reporters before take-off.

The prime minister will be joined by Trade Minister Damien O’Connor and 13 business leaders, including Fonterra CEO Miles Hurrell.

“This first trade mission is part of our wider plan to reconnect with the world following the devastation caused by the COVID-19 pandemic, strengthening partnerships between government, business, and industry will help accelerate our strong economic recovery,” Ardern previously said in a statement.

As part of her three-day trip in Singapore, Ardern will attend an official welcoming ceremony and an official lunch hosted by Prime Minister Lee Hsien Loong.

She will also address the Japan-New Zealand Business Council and meet with business and industry leaders.

The trade minister said unlocking opportunities in key markets was an important trade strategy as the country begins reconnecting with the world.

“Singapore is our fifth largest with a total of NZ$6.56 billion in two-way trade over the same period. Singapore is an important market for dairy and tourism and are also a key regional hub for New Zealand exports and imports,” he added.

Despite the tourism promotion, all tourists, except those from Australia, are still barred from entering the country until May 2.

Ardern is also expected to visit Australia, the United States, and Europe this year.