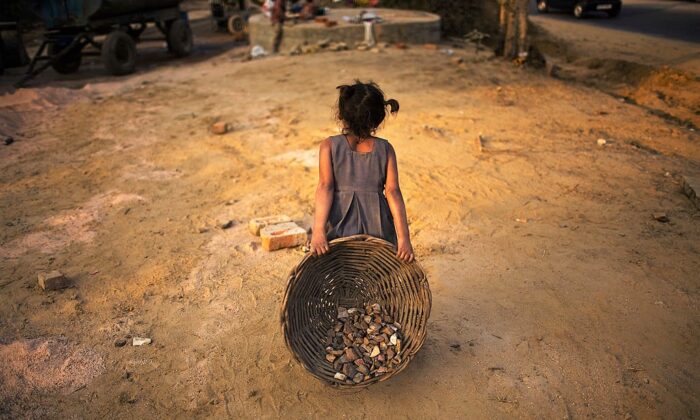 Indian children work nearby to their parents at a construction project in front of the Jawaharlal Nehru Stadium in New Delhi, India, on Jan. 30, 2010. (Daniel Berehulak/Getty Images)
Asia & Pacific

“As New Zealanders, most of us believe in decency and dignity for people, and we’re appalled at the possibility that some of the goods that we might consume in our country, or the services that we enjoy, might have been produced through modern slavery or worker exploitation,” Workplace Relations Minister Michael Wood said on April 8.

The proposals aim to address these issues and give Kiwis confidence that the goods and services used are produced and enacted ethically, and businesses will be required to take action if they are aware of slavery issues.

Large businesses will also be required to undertake due diligence to prevent any worker exploitation in its supply chains, making it one of the toughest modern slavery laws in the world.

“The International Labour Organisation estimates that there are up to 25 million people around the world who work in conditions of modern slavery,” Wood said. “If organisations choose not to look for exploitation on their supply chains, they can potentially inadvertently benefit from those exploitative practices.”

There has been increasing calls for the government to address the issue of slavery in supply chains, with more than 37,000 signatures from Trade Aid and World Vision calling for a modern slavery law in 2021. A further 113 businesses also signed a letter calling for its consideration.

World Vision estimates that every New Zealand household spends on average $34 (US$23) a week on goods associated with either forced labour or child labour.

It also found that in 2019, every adult had consumed three cups of coffee a week, or 700 million cups in total, that was associated with or at risk of modern slavery.

Wood noted that there was also an increasing international expectation on countries to take action, with modern slavery legislation already in place in countries like the United Kingdom and Australia.

World Vision welcomed the public consultation launch and urged Kiwis to get involved and make a submission.

“Currently, many New Zealand companies have no visibility of the risks of modern slavery in their supply chains and could unwittingly be helping to facilitate modern slavery through their purchasing or business relationships,” World Vision Head of Advocacy Rebekah Armstrong said.

Chris O’Reilly, the CEO of AskYourTeam and an anti-slavery advocate, said the proposed legislation offered New Zealand the opportunity to position its produce as the most ethical in the world.

“With a coordinated, collaborative approach, and our Kiwi ethos of fairness and dignity, we could easily leapfrog other countries whose own worker rights requirements will soon lag behind,” he said.

O’Reilly noted that businesses did not need to wait for the legislation, they “can get started now.”

“Business leaders can begin thinking about where they sit on worker exploitation mitigation and how they will progress change,” he said. “We realise every business has different priorities and challenges, and some may be further along than others.”