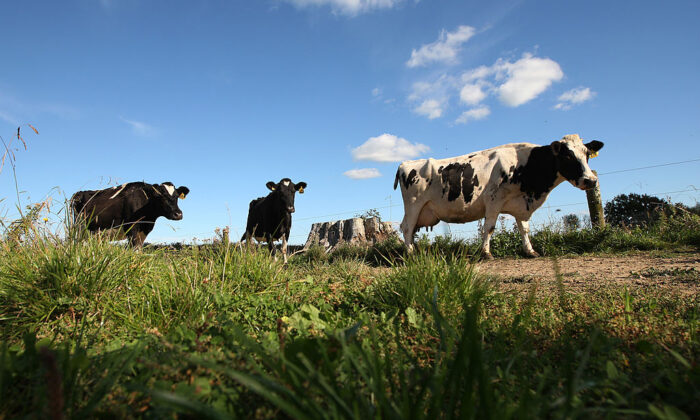 A herd of cows make their way down the race to the milking shed at a dairy farm in Morrinsville, New Zealand, on April 18, 2012. (Sandra Mu/Getty Images)
Asia & Pacific

As part of the New Zealand government’s emissions reduction plan announcement for the 2022 budget, $710 million (US$450 million) has been promised to support the agriculture industry’s efforts to lower emissions, despite not contributing a cent to the funding pool.

The agricultural industry is both New Zealand’s biggest export earner and the biggest contributor to emissions but is not required to contribute to the Emissions Trading Scheme (ETS) until 2025.

However, the entire emissions reduction plan is funded by the ETS, meaning other sectors, such as transport and energy, will be subsidising research and development for agriculture.

Damien O’Connor, who is both the agriculture and trade minister, said the nation’s economic security depended on its food and fibre sector.

“If we don’t take action now, we will be at risk as consumer preferences evolve,” he said.

Almost half of the promised funding will be allocated to accelerate the development of technology and practices to reduce greenhouse gas emissions.

Further, around $73 million (US$45 million) will go towards increasing woody biomass, an alternative to coal, by enabling the planting of 10,000 hectares of forest.

Emeritus professor of sustainable energy and climate mitigation at Massey University, Ralph Sims, noted that while more funding for research and development was welcome, previous well-funded projects have failed to produce any tangible results.

“The Minister of Agriculture emphasised R&D on the potential for producing sustainable aviation fuels from woody biomass (i.e. biofuels from short-rotation forests), but he doesn’t seem to know that R&D investment on achieving this goal has been underway in NZ for over four decades—but without commercial success to date. So can we keep waiting for a breakthrough?” he said.

Meanwhile, the Forest Owners’ Association (FOA) and the Climate Forestry Association (CFA) welcomed the plan to reduce emissions but said the initiative to plant native trees would not be able to yield any immediate results.

“Native trees are not capable of reducing our net emissions in any substantial degree this side of next century. They grow too slowly,” FOA President Grant Dodson said. “It’s a fact of life that exotics, such as pines or eucalypts, do a much faster job of locking up atmospheric carbon.”

Similarly, CFA spokesperson Sean Weaver supported this, saying the government needed to incorporate exotic trees as one of its tools to decreasing the country’s carbon footprint.

“Exotic trees are our sprinters—they grow quickly and sequester much more carbon over the short term. Native trees, which grow far more slowly, are our long-distance runners, sequestering carbon over the long term,” he said. “The point is, we need both, for immediate carbon reductions now and long-term sequestration.”

New Zealand emitted approximately 0.17 percent of the world’s total carbon emissions in 2019 according to the government.