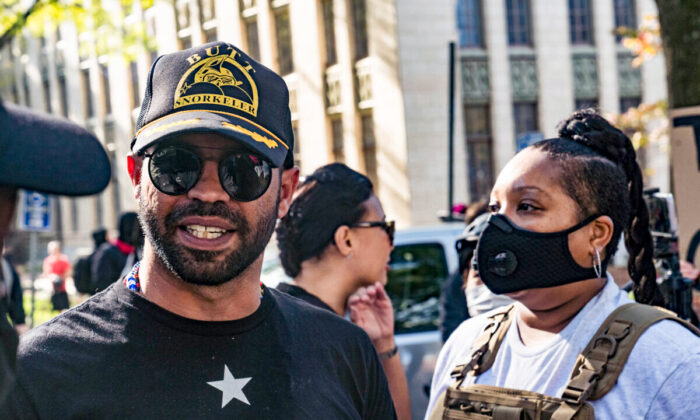 Enrique Tarrio, head of the Proud Boys, is escorted out of the area after arguing with counter-protestors at a 'Stop the Steal' protest outside of the Georgia State Capital building in Atlanta, Ga., on Nov. 21, 2020. (Megan Varner/Getty Images)
Asia & Pacific

New Zealand has formally designated the U.S.-based groups the Proud Boys and the Base as terrorist organisations.

The move was approved by Prime Minister Jacinda Ardern on June 20 and publicly announced in the country’s official government newspaper, New Zealand Gazette, one week later.

The Proud Boys is a fraternal group that described itself as anti-social-justice warriors and the Base is a neo-Nazi group. They join 20 others on New Zealand’s designated terrorist entity list, including Islamic Jihad, the Irish Republican Army and Shining Path.

The New Zealand government has no information that suggests the two groups operate within the country.

“Any person who deals with the property of, or makes property or financial or related services available to, the entities listed below may be liable to prosecution for an offence under sections 9 and 10 of the TSA (Terrorism Suppression Act),” Police Commissioner Andrew Coster said.

“Furthermore, any institution or person who suspects that property is owned by either entity is required to report the existence of that property to the commissioner of police.”

The Proud Boys’ involvement in the Jan. 6 Capitol breach and it’s “extreme right-wing ideology,” according to New Zealand authorities, met the criteria for the terrorist designation.

Tarrio was not at the Washington D.C. protests on Jan. 6 but pleaded guilty to burning a Black Lives Matter flag and for the possession of two high capacity, .556 caliber firearm magazines, according to charging documents.

Four members have pleaded not guilty, while a sixth member pleaded guilty in April to conspiracy to obstruct an official proceeding and assaulting, resisting, or impeding officers.

New Zealand authorities allege that the Proud Boys engaged in the “violent attack” on the Capitol Building.

Prior to the Capitol breach, New Zealand authorities describe the groups activities as mainly engaging in “political and personal intimidation,” for example waving its flag to “incite violence against ideological opponents.”

The group is known to regularly confront and fight with members of Antifa, a far-left, anarcho-communist network.

Meanwhile, the Base was deemed a terrorist entity for its intention to bring about a “race war” that would lead to the collapse of democratic government, as well as its plan to shoot and kill civilians and police at a gun rights rally in Virginia on Jan. 20, 2020.

In the explanation document, the Base is described as being both neo-Nazi and extremist right-wing, despite the two ideologies being polar opposites.

Canada also lists the Proud Boys as a terrorist organisation, while the Base is already designated a terrorist group by the United Kingdom, Canada, and Australia.

The Federal Bureau of Investigation (FBI) does not consider the Proud Boys organisation a domestic terror group, according to Director Christopher Wray.

“Well, I don’t think we have treated the Proud Boys itself as a domestic terrorism group,” he said in March 2021.