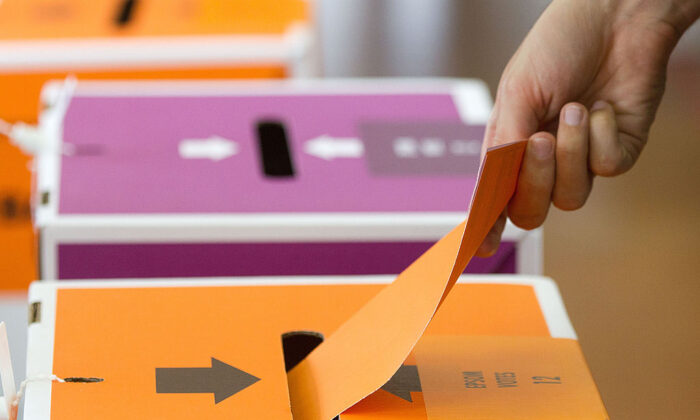 A voter casts his ballot during the general election at a polling center in Auckland, New Zealand, on Nov. 26, 2011. (Marty Melville/AFP via Getty Images)
By Rebecca Zhu

Rebecca Zhu
Rebecca Zhu is based in Sydney. She focuses on Australian and New Zealand national affairs. Got a tip? Contact her at rebecca.zhu@epochtimes.com.au.
View profile
biggersmaller
Print

New Zealand’s peak judicial body, the Supreme Court, has declared the current minimum voting age of 18 to be discriminatory, paving the way for the voting age to be lowered to 16.

Activist group, Make It 16, has been advocating for three years to drop the minimum voting age so that it is in line with New Zealand’s Bill of Rights, which says people 16 years and above have the right to be free from discrimination on the basis of age (pdf).

Earlier cases were unsuccessful with the New Zealand High Court ruling the 18 year limit a “reasonable minimum restriction” while the Court of Appeal refused to declare any inconsistency between the Bill of Rights and the voting age.

However, Make It 16 finally managed to obtain a favourable judgment from the Supreme Court which ruled, in a four to one majority, that the minimum voting age was “inconsistent” with the Bill of Rights

Justice Stephen Kós, the only dissenting judge, said that while he did not consider there to be any inconsistencies in general elections, he agreed that something needed to be done for local elections.

“This is history,” said Make It 16 co-director Caeden Tipler in a statement on Twitter.

“If the government does not make the voting age 16 now, then they are consciously breaching our human rights.”

Such a move will likely benefit left-wing or progressive-leaning political parties with Australian research firm Roy Morgan finding that young Kiwis were more likely to support the Greens Party.

Ultimately It Will Be Up to Parliament

Despite the judgment, only the Parliament, and not the Court, has the power to change the voting age.

To formally change the voting age in general elections, the Parliament would require a super majority, or 75 percent, for the legislation to pass.

However, a change in voting age for local elections would only require a majority vote, or 51 percent.

“We’ve only just received this declaratory judgment. We have not yet drafted anything and those are some of the issues that would need to be worked though,” Ardern told reporters.

The prime minister said she personally supported the move to lower the voting age.

“For me, its alignment around some of the responsibilities and rights that are already apportioned at these different ages,” Ardern said, adding that her vote was just one out of 120 in Parliament.

However, the opposition party has already indicated that it does not support a lower minimum voting age.

“Many other countries have a voting age of 18, and National has seen no compelling case to lower the age,” National’s justice spokesman Paul Goldsmith said.

“Young people deserve to have a say in the decisions that affect them, both now and in the future,” Green Party electoral reform spokesperson Golriz Ghahraman said. “We are calling on the government to come to the table with a plan to change the law to extend the voting age.”

The decision comes ahead of the next general election, to be held in 2023.

However, any moves to change the voting age would have no effect on the next general election and would only come in force for the following one.

This is to avoid leaving the impression that the change would be to the benefit of the current government, Ardern said.

Rebecca Zhu
Rebecca Zhu is based in Sydney. She focuses on Australian and New Zealand national affairs. Got a tip? Contact her at rebecca.zhu@epochtimes.com.au.