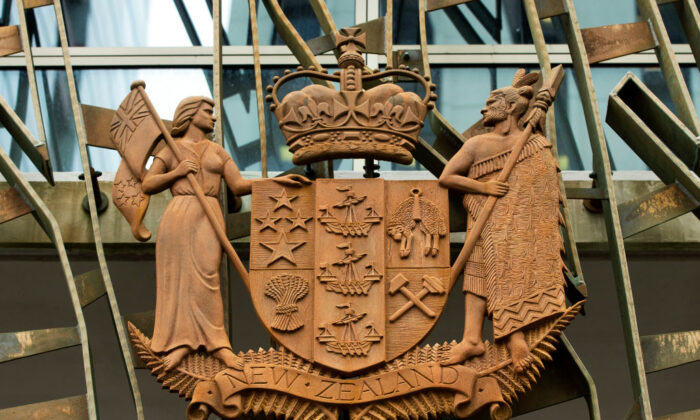 A general view of the coat of arms at the Supreme Court in Wellington, New Zealand, on June 12, 2019. (Hagen Hopkins/Getty Images)
Asia & Pacific

The trial of a man found guilty of 33 child sexual abuse charges has placed New Zealand’s little-known law that a person under 16 can give consent for sex under scrutiny spurring calls for the government to amend the laws.

Tulisi Leiataua was found guilty by a New Zealand jury of sexual abusing two girls aged eight and 12 over a four-year period from 2010 to 2014. However,  during his defence Leiataua argued that he was having a sexual relationship with the 12-year-old and denied allegations of rape, indecent acts, and sexual violations.

Additionally, Leiataua argued that the relationship had been “consensual” as she was the one who had pursued him, according to the NZ Herald.

All allegations in relation to the younger girl were denied.

However, New Zealanders have become upset after Judge Richard Earwaker explained to the jury that according to the laws around consent, in New Zealand a person under the age of 16 could agree to enter into a consensual sexual relationship.

“Legally, a person under 16 cannot give consent for charges of indecent acts, therefore, as a jury, all you need to decide is if the indecent acts took place,” he said.

“But as for sexual intercourse, a person under 16 can give consent. You need to consider whether or not the consent was given based on the evidence you have. Remember, an adult cannot give consent to a minor, in fact, nobody can give consent for somebody else.”

Law in Urgent Need of Amendment

Advocates have called on the Ardern government to review the laws around consent to protect children who are victims of sexual abuse.

Kathryn McPhillips, executive director for HELP Auckland, said New Zealand “urgently” needed to amend the consent law to clarify that “children cannot be considered to have consented to sexual activity with an adult.”

“As it stands, New Zealand law allows adults to accuse children of having consented to sex if the charge against the adult is a sexual violation,” she said. “Sexual behaviour between adults and children is always the responsibility of the adult, and children hold no blame for what is done to them.”

McPhillips noted that a report from the chief victim’s advisor, which provides independent advice to the minister of justice about victim issues, suggested that some defence lawyers have been using this law against children as young as six-years-old (pdf).

The report also explored how judicial processes in child and adolescent sexual violence complaints were distressing for young people.

Aggressive cross-examination, where the credibility of the young person’s claims is fiercely challenged by defence lawyers, was found to be the most distressing aspect.

“They confused [my son]. They confused him on purpose. The lawyer for the defence was telling him that he was wrong, that what he was saying was not true … It seemed like the case came down to being able to successfully confuse the children enough to get a paedophile off a charge,” one parent alleged.

Leiataua will be sentenced in September.