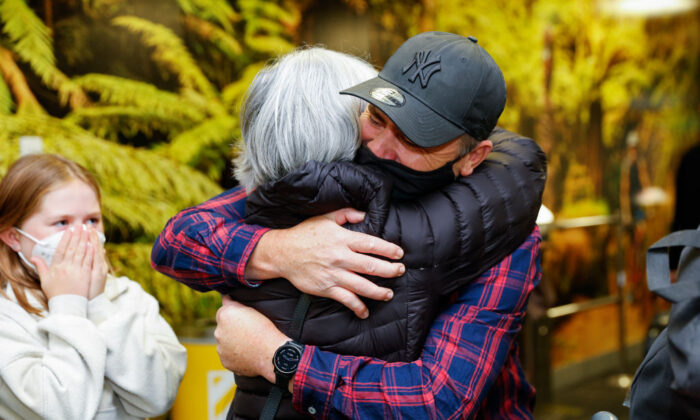 A passenger is greeted after arriving on a flight from Sydney at Wellington International Airport in Wellington, New Zealand, on April 13, 2022. (Hagen Hopkins/Getty Images)
Asia & Pacific

Hundreds of people flying from the United States have touched down in New Zealand on the first day of its border reopening to citizens from visa-waivered countries.

Tourism Minister Stuart Nash said the nation was “back on the world map” for tourism and business travellers on May 2, with isolation requirements being removed for people who are vaccinated.

“We are currently seeing around 33,000 arrivals per week, and we know today’s changes will further boost arrivals as interest in travel to New Zealand remains high,” Nash said on May 2. “International flight searches to NZ are running 19 percent higher than pre-COVID (March–April 2019).”

New Zealand had already opened its borders to vaccinated Australians on April 13.

Air NZ’s first three flights into the country will be carrying almost 1,000 people, with two flights from the United States and one from Fiji.

“[The flights] are filled to the brim with overseas visitors and returning Kiwis thrilled to land on New Zealand shores once again as they reconnect with family, start their studies, or build their businesses,” Air NZ Chief Customer and Sales Officer Leanne Geraghty said on May 1.

Geraghty said demand for flights has exceeded expectations, with services filling up across both domestic and international networks.

“This is welcome news for the New Zealand tourism industry, who has weathered a difficult storm over the past 800 days,” she said.

Tourism Industry Aotearoa (TIA) said the industry was feeling hopeful as the border reopening plan moved to the next phase, with many operators being excited to report forward bookings.

David Gatward-Fergusson from Nomad Safaris Queenstown said the industry was delighted that there was progress and that “at some point” things would return to normal.

Air NZ CEO Greg Foran said the airline only had four weeks to restart operations after Prime Minister Jacinda Ardern unexpectedly announced that the reopening would be brought forward by six months.

“So capacity isn’t running at what it was, but that’s gradually increasing, and we’re able to get customers, by and large, where they need to get to on time, with everything intact,” Foran told the AM show.

However, he said he was keen for the pre-departure testing policy to be removed, at least for people returning back into the country, saying it added “friction” for some customers planning to travel.

“There is no doubt that at the right time, and this a decision that the government will need to make, we would much prefer if we didn’t have pre-departure testing,” Foran said.

Travellers are currently required to do both a pre-departure and arrival test for COVID-19.