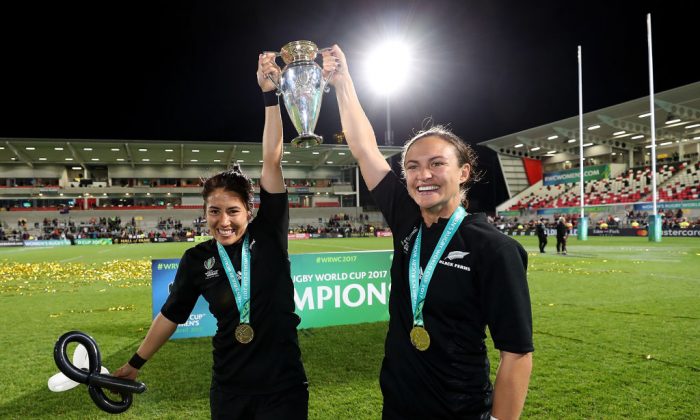 England faced New Zealand in the Women’s Rugby World Cup final at the Kingspan Stadium in Belfast at 7.45pm on Saturday (Aug 26), in a battle between the current world cup holders, and the current number one ranked team respectively. New Zealand opened strongly and put England under pressure but then had to repel a number of England drives for the try line when the balance of play switched. New Zealand took the lead with a try in the 5th minute when a cross field kick was fired to the right wing 35 yards out towards Portia Woodman. Although the kick was a little too strong and far ahead, full back Seleca Winiata chased forward to collect the ball before it reached touch, then raced into the corner for the try, but the conversion fell short.

The try seemed to knock England’s confidence and structure, which they eventually recovered and then won a penalty in the 15th minute which Emily Scarrett converted.

England’s fortunes were boosted 5 minutes later when New Zealand’s Sarah Goss was yellow carded for lifting Katy Maclean resulting in 10 minutes in the sin bin. After England had a try discounted for being held up in the 24th minute, they won the resulting scrum, and as Sarah Hunter shepherded the ball towards the try line, the New Zealanders lost their discipline, and England were awarded a penalty try. After 32 minutes England won the ball 35 yards out and worked the ball wide before Katy Maclean passed the ball to Lydia Thompson who raced in for a try, the conversion added by Emily Scarrett.

New Zealand forced possession into the England half and after a succession of drives for the try line, Toka Natua powered over to reduce the deficit to 17-10 which was the half time score once the conversion had failed.

New Zealand came out fired up after the break, immediately claimed possession and territorial advantage before Toka Natua again drove over with the conversion completed by Kendra Cocksedge to tie the scores at 17 all, and shift momentum their way. In a flurry of activity, Emily Scarrett put England ahead again in the 51st minute with a penalty that dropped over after hitting the right post, New Zealand immediately struck back with Charmaine Smith finally driving to the foot of the right hand post after a number of previous attempts had been thwarted by English defence, with Kendra Cocksedge again adding the conversion, and England restored their lead two minutes later, by a point (25-24), when Lydia Thompson collected a New Zealand kick on the half way line, zig zagged between a couple of flailing defenders before sprinting half the pitch just inside touch and into the corner.

However, the relentless New Zealand pressure was taking its toll on England, and they lost a bit of structure and composure, and Toka Natua went over for her hat-trick in the 58th minute, with Kendra Cocksedge adding the conversion, and then scoring another try herself 4 minutes later (25-36). Kendra Cocksedge then chipped the ball to the wide right in the 69th minute where the ball was caught before being shifted out to the on-running Seleca Winiata to touch down in the corner for a 24-41 New Zealand lead.

Although New Zealand’s Ketu received a yellow card resulting in a sin bin in the 76th minute, and England scored a try through Isinolde Smith in the 77th minute which was duly converted, time ran out for England, and New Zealand were crowned World Cup winners, with a well-deserved 32-41 scoreline after a powerful second half performance, where they starved England of possession.

France beat USA 32-23 for the bronze medal place, Canada took 5th place in a closely fought match against Australia which ended 17-12, Wales outpointed Ireland 27-17 for 7th place, Italy took 9th place in another close points encounter finishing 20-15 with an extra time golden try, and Japan put in a strong performance to defeat Hong Kong 44-5. For Hong Kong, a newcomers to the tournament, the competition level was a big step-up but having been involved, will add momentum to the game in the SAR and also in Asia.

The Hong Kong team will receive a hero’s welcome on their return home for making history, showing they can compete at this level, always fighting to the end, but in reality, they still have a cliff to climb to add points. For New Zealand, to reach the final and probably regain the World Cup was their initial objective. Objective fulfilled and another great performance by the Black Ferns.