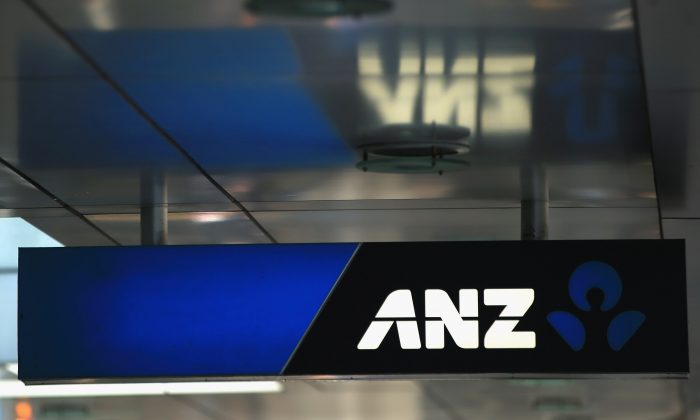 ANZ Bank signage is pictured on Auckland's Queen Street on Sept. 26, 2012 in Auckland, New Zealand. ANZ National, is expected to announce later today it will scrap the National brand and unions are looking for clarification on whether re-branding the bank will lead to job losses. (Phil Walter/Getty Images)
Asia & Pacific

WELLINGTON–New Zealand financial authorities have met with the country’s biggest banks seeking assurances they are not engaged in the sort of misconduct exposed at their Australian parent banks by a powerful judicial inquiry.

The Royal Commission, as the Australian inquiry is called, has been a publicity disaster for Australia’s major lenders, all of which own New Zealand banks, turning out revelations of widespread corporate malfeasance since it began in February.

Among other discoveries, Australia’s largest listed wealth manager, AMP Ltd , was found to have charged customers for advice it never provided, then deceived the corporate regulator, while the country’s biggest mortgage lender, Commonwealth Bank of Australia , charged fees to dead clients.

“To date we haven’t seen any evidence of systemic abuses along the lines of the Australian industry, but as we’ve said to the New Zealand banks, we can’t afford to be complacent,” Financial Markets Authority (FMA) Chief Executive Rob Everett told Radio New Zealand on Wednesday.

“We’ve asked them to provide assurances to us … that they have scrubbed their business models, and that they have a basis for being confident that these issues don’t exist here.”

A deadline was not set and the FMA expects it will be weeks before the banks reply, Radio New Zealand reported.

If they fail to cooperate “then they’ll see more of us in court”, Everett said.

The New Zealand heads of those banks met with the FMA, Reserve Bank officials and the country’s banking ombudsman on Monday evening, ANZ’s New Zealand spokesman Stefan Herrick said in a statement.

“Confidence in the financial services sector is important so we’re very happy to cooperate with the regulators on their inquiry,” he said.

ASB said banking operations and products are “simpler” in New Zealand, that it has an independent board and has a “different culture” to Commonwealth Bank’s, which was roundly criticized on Tuesday by Australia’s prudential regulator.

“However, there are also similarities and therefore we will be working with our regulators to demonstrate why the issues raised in Australia do not apply here or, where we can learn from the Royal Commission,” it said in a statement.

None of the other banks had an immediate reply to Reuters’ requests for comment.

Australia’s Royal Commission was convened after years of financial-sector scandals including rate-rigging and alleged money-laundering.

ANZ Bank, Westpac and ASB agreed during 2014 and 2015 to pay a total of NZ$24 million ($17 million) in compensation after admitting to engaging in misleading conduct over the sale of interest rate swaps to New Zealand farmers.

ANZ New Zealand Chief Executive David Hisco said there were “no systemic issues” and his bank welcomed the scrutiny.

“We’re not seeing or hearing the stuff that’s over there,” he said in an interview with Radio New Zealand.