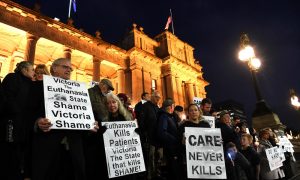 New Zealand has provisionally voted to legalise voluntary euthanasia but is on course to reject law changes that would allow recreational marijuana use, the country’s Electoral Commission said on Friday.

New Zealand voted on the two referendums this month while casting ballots during a general election that returned Prime Minister Jacinda Ardern to power.

Issuing preliminary results, the NZ Electoral Commission said there are nearly half a million mostly overseas-based special votes still to be counted. These votes will not be enough to alter the vote on euthanasia but may be enough to swing the count on recreational marijuana, it said.

Full results will be published on Nov. 6, but with more than 65.2 percent of voters in favour of the recently passed legislation permitting euthanasia, New Zealand will become the seventh country to allow assisted suicide.

The law, called the “End of Life Choice Bill,” is set to come into effect in November 2021.

It allows terminal patients with less than six months to live to request assisted suicide. Those requesting euthanasia will have to be 18 and will need the approval of two doctors.

Right to Life New Zealand, a pro-life group based in Christchurch, condemned the euthanasia bill.

“The support of 65.2 per cent who voted yes to the euthanasia referendum marks a sad day of infamy in our nation’s history,” spokesperson Ken Orr said in a statement. “New Zealand now has the notoriety of being the first country in the world that has approved with a national referendum to allow the killing of its most vulnerable.”

The NZ Right to Life statement said that the law is “merely the first step in implementing the agenda of the international euthanasia movement.”

The group warned, “This is the legislation that provides cover for the perfect crime, the victim is killed and disposed of, there are no witnesses and their death certificate is falsified to conceal the truth that the patient was actually killed by their doctor. No doctor will be tried for manslaughter or homicide, because they will always be acting ‘in good faith.'”

It adds, “This law may corrupt the medical profession and drive out some members who refuse to participate in mercy killing or assisted suicide …  The safeguards which should protect the vulnerable are not specificed in this law—no independent witnesses are required, and no consultation with family or whanau is required under this law.”

While euthanasia has been endorsed, recreational marijuana use is still up in the air.

New Zealand’s Electoral Commission said 53.1 percent of voters opposed the country becoming only the third to legalise the adult use and sale of cannabis, following Canada and Uruguay.

In 2017, Ardern supported the cannabis referendum plan in order to secure enough support to form a coalition government.

Ardern throughout the campaign refused to say which way she would vote, but a representative on Friday said the prime minister voted in support of both referendums.