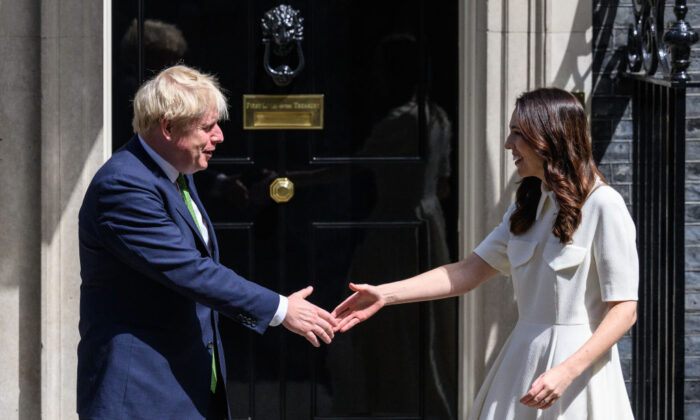 The prime ministers agreed to improve trade and travel mobility through the recently settled free trade agreement (FTA) and changes to visa schemes for young people.

“I am delighted we have concluded the upgrade to our Working Holiday/Youth Mobility Scheme, which will allow more UK and New Zealand citizens to travel and work in each others’ countries for longer,” Ardern said.

The visas have been expanded to include people aged 30 to 35, and the length of stay extended to three years.

A joint statement said the decision to enhance the visa showed the “scale” of mutual interests that underpinned the relationship of both democracies.

“Travelling, living, and working overseas can be a wonderfully enriching experience. The UK loves to welcome Kiwis on their travels here while thousands of Brits have made the similarly life-changing journey to the southern hemisphere,” Patel said.

Ardern and Johnson also agreed to a new fast-tracked customs process for trade, aimed to benefit exporters accessing both markets. It builds on the New Zealand-UK FTA that was signed in February.

“The signing earlier this year of an FTA with the UK—one of our largest trading partners—provides a platform for our business and economic ties to further grow,” Ardern said.

The prime ministers also discussed significant challenges and opportunities facing the world today, such as security and defence, climate change, and online safety, and how the two countries can jointly respond.

“We also reaffirm our support for freedom of navigation and overflight in the South China Sea and beyond,” the prime ministers said in the joint statement. “Both countries also underscore the importance of peace and stability across the Taiwan Strait and encourage the peaceful resolution of cross-Strait issues via dialogue.”

Both leaders also noted the 25th anniversary of the handover of Hong Kong to China and reiterated “grave concerns” about the erosion of rights and freedoms in Hong Kong.

Ardern will be visiting Australia on July 4 for five days, flying directly from Europe as her trade missions to various countries continue.

“Australia is our second-largest trading partner, with two-way trade accounting for over NZ$22 billion (US$13.7 billion) in the year to December 2021, and is the first export market many New Zealand companies look to,” she said in a statement.