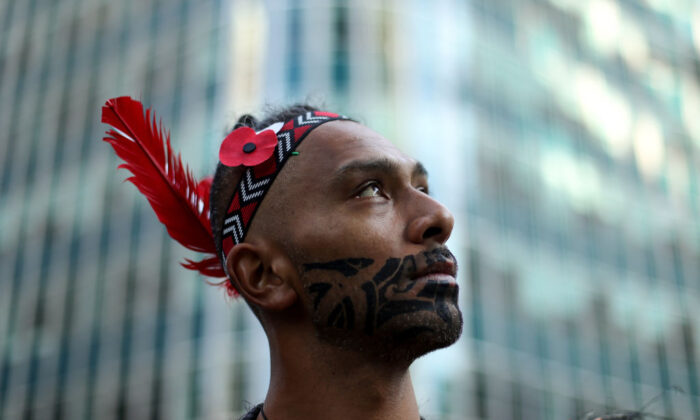 A Maori poses for a photograph ahead of the ANZAC Day parade in Sydney, Australia, on April 25, 2021. (Brendon Thorne/Getty Images)
World

New Zealand and Canada have signed a collaboration arrangement to improve outcomes for Indigenous peoples, both governments announced on Wednesday.

The purpose of the arrangement is to support collaboration and information exchange between the Indigenous peoples of both nations around economic, cultural, political, and environmental policy issues, both ministers said.

“Alongside an inspiring all-women Indigenous delegation, I am honoured to sign this Indigenous Collaboration Arrangement on behalf of the Government of Canada,” Hajdu said in a statement.

She said the arrangement had been in progress since 2020 by the Indigenous offices of both governments.

“The arrangement follows the signing of the Indigenous Peoples Economic and Trade Cooperation Arrangement last year and is just another step in our shared journey of reconciliation,” Hajdu said.

Hajdu said the new arrangement was just “one step,” with many more to come.

Nanaia Mahuta, the associate minister for Maori development, said both governments acknowledged the role Indigenous people play in their communities.

“We have much to learn from each other, and we are honoured to host a delegation as committed to advancing the wellbeing of their indigenous peoples as we are,” Mahuta said in a statement.

Hadju and her delegation will go on to meet with Maori tribes, groups, and service providers to discuss recent Indigenous developments in New Zealand, such as the establishment of the Maori Health Authority.

“We are looking forward to engaging with Minister Hajdu and her delegation on many issues. It’s a chance to share openly the lessons learned and facilitate dialogue on what our governments can do for our indigenous peoples now and in the future,” Jackson said.

A shared focus for both countries is the International Decade of Indigenous Languages, declared by the United Nations General Assembly to be the decade from 2022 as a period to draw attention to Indigenous languages and encourage their preservation and revitalisation.