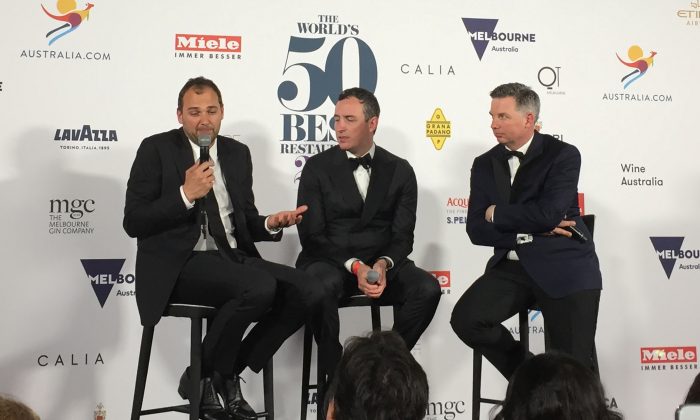 Co-owners of the restaurant Eleven Madison Park Daniel Humm (L) and Will Guidara (C) talk at a press conference during the 50 Best Restaurants awards in Melbourne, Australia on April 5, 2017. REUTERS/Sonali Paul)
New York

MELBOURNE—New York’s Eleven Madison Park nabbed the top prize at the World’s 50 Best Restaurants on Wednesday, only the second non-European restaurant to win the gong.

The restaurant overlooking Madison Square Park was praised for its sense of fun in blending a creative tasting menu with gracious hospitality. It rose from third place last year, overtaking Italy’s Osteria Francescana and Spain’s El Celler de Can Roca.

“We get to help people celebrate some of the most important moments in their lives or give them the grace to forget something for a moment,” said co-owner Will Guidara on receiving the top gong with Swiss-born chef Daniel Humm.

The restaurant, where Humm’s prized dish is celery root cooked in a pig’s bladder, has just extended its lease for another 20 years and will close for three months for an overhaul.

“We’re about to embark on a completely new journey,” Guidara told reporters, calling the prize a fitting end to the first phase of Eleven Madison’s journey.

Since the inception of the award in 2002, California’s French Laundry is the only other non-European establishment to claim the top prize. It won in 2003 and 2004.

The top 10 included two Peruvian restaurants, Central, which slipped to no.5 from fourth place last year, and Maido which climbed to no. 8 from 13.

Peru is becoming a dining hot spot as the country has so many terrains at different altitudes for creative chefs to gather ingredients, one of the voters for the award, German food writer Christoph Teuner, told Reuters.

The only Asian restaurant in the top 10 was Bangkok’s Gaggan, where owner-chef Gaggan Anand has created a modern take on his native Indian cuisine by deconstructing favorites like samosas and tikka masala.

Spain continued to dominate the line-up with three restaurants in the top 10, including Mugaritz, while France had only one in the top 10 – Mirazur in the south-eastern town of Menton.

Rounding out the top 10 was Vienna’s Steirereck, housed in a glass cube, where freshwater mountain fish is cooked at the table in hot beeswax.

The list was created by William Reed Business Media, and the gongs are now as coveted as Michelin stars.

Danish restaurant Noma, in the top 10 for nine successive years and winner of the award four-times, dropped out of the list as chef Rene Redzepi has closed the restaurant while moving it to a new venue in Copenhagen.

There are no criteria for putting a restaurant on the list, which is based on a poll of more than 1,000 chefs, food critics and other industry insiders spread across 26 regions. Each member gets 10 votes and at least four of those votes have to be for restaurants outside their region.