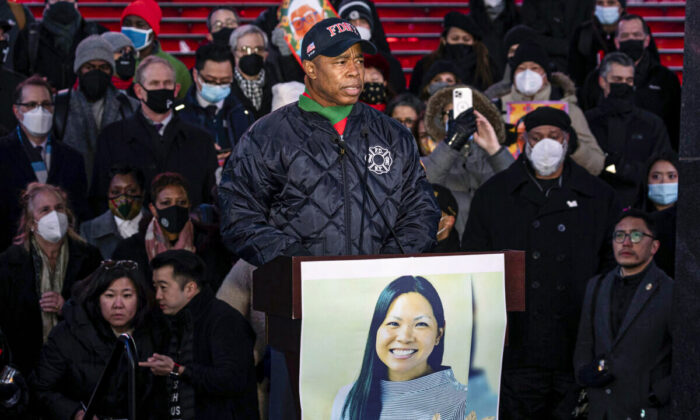 New Yorkers Remember Michelle Go, Who Was Pushed to Her Death in Front of a Subway Train

Scores of people gathered on Tuesday for a vigil in Times Square to honor Michelle Go, who was pushed to her death on subway tracks on Saturday.

The family of Go, who was an executive with Deloitte, have said they are still in shock at losing their daughter in a “senseless act of violence”—as they demand justice for her death, The New York Post reported.

Go, 40, was shoved from behind and killed in front of an oncoming R train Saturday morning by Simon Martial, a 61-year-old homeless man, according to police.

Martial’s family said he is schizophrenic.

Martial was arrested on Saturday on a charge of second-degree murder for allegedly pushing Go.

“We are in a state of shock and grieving the loss of our daughter, sister, and friend,” Go’s family said in a statement shared by ABC News correspondent CeFaan Kim. “We hope Michelle will be remembered for how she lived and not just how she died. She was a beautiful, brilliant, kind, and intelligent woman, who loved her family and friends, loved to travel the world and to help others. Her life was taken too soon in a senseless act of violence, and we pray that she gets the justice she deserves.”