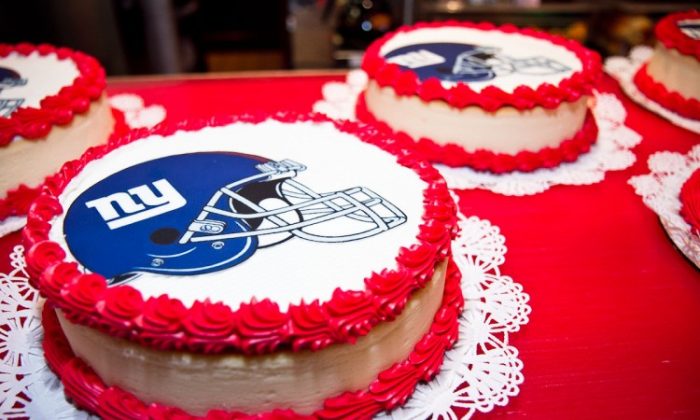 NEW YORK—Longtime pastry chef at Junior’s Restaurant in Flatbush, Brooklyn, spent 24 hours, with only a couple hours of sleep, from Tuesday to Wednesday baking 46 Super Bowl cakes. Gov. Andrew Cuomo bet Mass. Gov. Deval L. Patrick 46 cheesecakes and 46 cases of Greek yogurt made in New York, and 46 dozen bagels from Ess-A-Bagels that the New York Giants will win the 46th Super Bowl on Sunday in Indianapolis.

Gov. Patrick won’t eat all that himself—the food will go to Massachusetts food banks. If the Giants lose to the New England Patriots, however, Patrick will donate 46 Boston cream pies, clam chowder, and 46 cases of chips to New York City food banks.

Mayor Michael Bloomberg has made similar epicurean bets in the past, but this year he made a wager of a different sort with Boston Mayor Thomas M. Menino. If the Giants win, Menino will pay for a New York family to fly to Boston, stay in a hotel, eat out at two famous restaurants, visit cultural hot spots, and watch sporting events. If the Patriots win, Bloomberg will treat a Boston family to the same holiday in New York.

“You could walk around naked in Times Square and it wouldn’t matter. In New York, you can get away with that kind of thing. Up there [in Boston] he might get arrested!” said Firth with a laugh.

Legends will have a full house on Sunday, says Firth. They ordered in 100 extra cases of beer and doubled the staff.

A couple doors down, however, Sean Gillespie at Jack Dempsey’s sports bar says he doesn’t expect much of a crowd.

“People stay home and have parties, they don’t come out to the bar,” said Gillespie, who will throw a Super Bowl party at his home with his super-spicy ‘best in the world’ chili.

“Everyone here are Giants fans, so they don’t want to work. We’ll just be worried about getting out early,” said Gillespie. He said they stick the international staff, who have more of a taste for soccer, on the bar and then switch roles when there’s a big soccer match on.

Meanwhile, the city’s water treatment facilities are in for an event of a different nature.

“SuperBowl halftime flush has to go somewhere; for 14 NYC wastewater plants, it’s Super Sunday in more ways than one!” tweeted the Department of Environmental Protection on Wednesday.