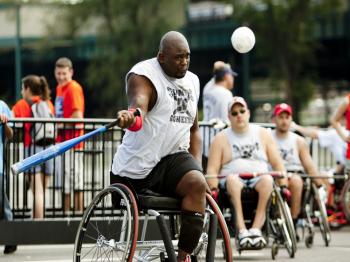 A player for the Columbus Pioneers wheelchair softball team swings at the 34th Annual National Wheelchair Softball Tournament outside Citi Field, in Queens, on Thursday. (Henry Lam/The Epoch Times)
US

Softball on Wheels Outside Citi Field

Andrea Hayley
Reporting on the business of food, food tech, and Silicon Alley. Studied the Humanities for undergrad, and obtained a Master of Arts in business journalism from Columbia University. I love covering the people, and the passion, that animates innovation in America. Email me at andrea dot hayley at epochtimes.com
View profile
Follow
biggersmaller
Print
NEW YORK—The city has finally joined the big leagues—in wheelchair softball anyway. For the first time, New York City is playing host to 16 wheelchair softball teams from across the country, including teams dubbed the New York Mets and the New York Yankees in the 34th Annual National Wheelchair Softball Tournament running Aug. 19-21.

The tournament, hosted by the regular New York Mets, the Wheelchair Sports Federation, and the New York City Parks Department, is located at the very large parking lot of Citi Field in Queens that was created last year through the demolition of Shea stadium. Three asphalt fields have been cordoned off and marked out where the rolling players will battle it out for the National Championship title.

The home plate of the championship field is the exact location where Shea Stadium home plate used to be, according to Danielle Parillo, the METS director of Communications.

“They are rolling where so many great Mets players have played in the past,” Parillo said.

The Mets softball team has been running their own regional major league sponsored softball tournament for nine years. This year, as a marker of their 10-year anniversary, as well as in honor of the new stadium, the Mets were chosen to host the National Championships.

Many of the teams are from the Midwest, where national tournaments have been held in the past due to the popularity of the game there. Teams will compete for the Division I and Division II National Championship in a double-elimination tournament format.

“I think it is a beautiful opportunity to showcase New York, to showcase the city for these Midwestern boys,” said Jim Leatherman, a 20-year veteran of wheelchair and adaptive sports, who lost his legs in a train accident when he was just 6.