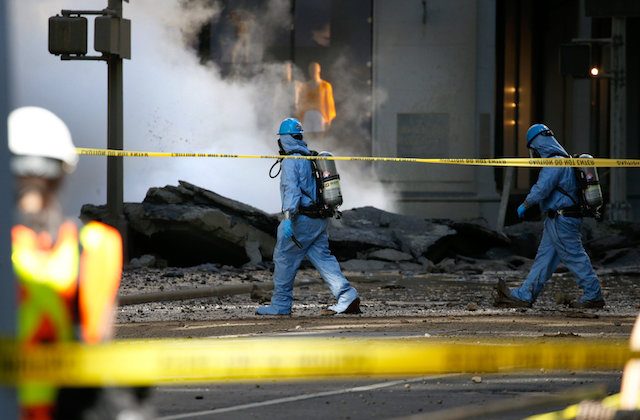 A thick plume of white steam shot up through a crater that opened up around 6:40 a.m. EDT near Manhattan’s sharply angled Flatiron Building, prompting police to shut down traffic for an eight-block area.

Officials said the blast, which is under investigation, caused no injuries or evacuations, but that they were carefully monitoring the situation as steam continued to spew from the street for at least two hours after the explosion.

Although vehicular traffic was diverted in the immediate area because of street closings, other commuting disruptions were minimal.

Two subway lines were bypassing a stop at 23rd Street more than two hours after the blast due to street closures, the Metropolitan Transportation Authority said.

The steam pipes are part of a 136-year-old system, which local power company Consolidated Edison Inc said was the nation’s largest steam system, stretching from the southern tip of Manhattan to 96th Street.

Con Ed said it was working to isolate the rupture and to close valves. It urged people to avoid the area and recommended that anyone who came into contact with any material from the steam blast shower should put their clothes in a bag.

The company said it was carrying out environmental testing to determine whether any contaminants, such as asbestos, were present.