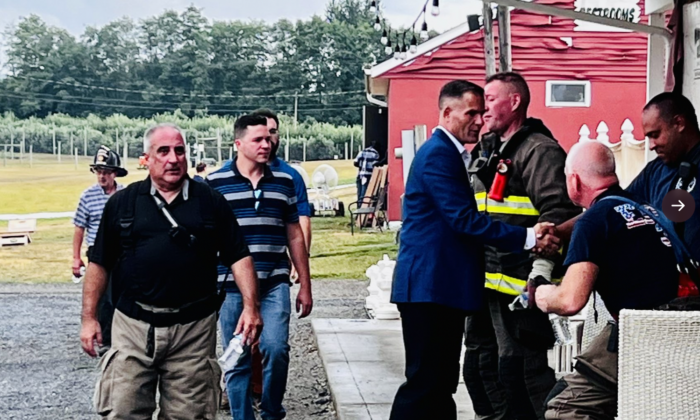 New York Congressional District 19 Aug. 23 Republican special election candidate Marc Molinaro, in suit, thanks firefighters in Beekman on Aug. 22 after they responded to a fire at Barton Orchards. (Courtesy of Molinaro for Congress)
2022 Midterm Elections

But first things first: the county executives from opposite sides of the river are also squaring off in an Aug. 23 special election for “old” CD 19’s vacant U.S. House seat.

The winner of the Molinaro-Ryan CD 19 special election will serve out Rep. Antonio Delgado’s (D-N.Y.) remaining term, about four months, as the “old” district’s representative in Congress.

Delgado resigned in May to become lieutenant governor. His seat has been empty since. It will no longer exist when the next Congress convenes in January 2023.

CD 19 is one of two New York congressional seats that have idled empty since the state’s congressional district map had to be drawn by a judge-appointed special master last spring.

A constricted 26-district map adopted for the 2022 midterms by the state’s Democrat-controlled General Assembly was rejected as gerrymandering in court rulings. A special master was tabbed to re-craft them.

Because the map wasn’t approved until May, New York’s 2022 primaries were split. Party contests for statewide positions, such as governor, were staged June 28 with congressional and state senate primaries set for Aug. 23.

The two New York special congressional elections make it eight that have been conducted nationwide to fill vacant congressional seats during the 2022 midterm primary cycle. A ninth is set for Indiana’s Nov. 8 ballot to replace Rep. Jackie Walorski (R-Ind.), killed in an Aug. 3 traffic accident.

Neither Sempolinski, who is favored in the deep red western New York district, nor Della Pia are running in November. Both will only serve the last four months of the 2021-22 congressional term before ceding in January to the winner of fall’s general election.

That is not so with the two candidates in CD 19’s special election. Both have ambitions beyond serving the remaining months of a congressional term in a lame-duck district.

Regardless who loses the race for the “old” district seat, Molinaro and Ryan are virtually assured of advancing to the general election and be favorites—Molinaro overwhelmingly so—in “new” districts to win a congressional seat.

Therefore, an election to serve out the final four months of a lame-duck congressional district would appear relatively inconsequential. But again, that is not so for CD 19’s special election.

Molinaro, 45, and Ryan, 40, are both regarded as rising stars in their respective parties, and their head-to-head clash is garnering national attention—and big money.

“It’s a very important election” in generating momentum for November runs by Republicans in New York and across the country, Molinaro told The Epoch Times in July, noting that the district won by Democrat Delgado in 2020 is ripe for flipping red in August, and keeping it that way in November.

On the other hand, he said, if Democrats are successful in a desperate bid to retain the seat in a Republican-majority district, “they are going to capitalize on that” and rally with renewed vigor in the 2022 midterms.

CD 19 is rated R+4 by The Cook Political Report and regarded as “leaning” Republican by FiveThirtyEight and Sabato’s Crystal Ball. All give the electoral advantage to the Republican candidate—Molinaro—against Democrats in the Aug. 23 and Nov. 8 elections.

Molinaro outpolled Cuomo by 11 percentage points in the 2018 gubernatorial election in what is now CD 19.

But the special election to occupy a congressional seat for four months is being bitterly contested by Molinaro and Ryan in a race that has garnered more than $3.2 million in donations, with both parties’ congressional campaign committees playing an active role.

“The last thing Upstate New York needs is another corrupt pay-to-play politician like Marc Molinaro, whose priority is enriching his donors and special interests instead of helping families and working people,” the DCCC said in statement released with the ads.

Polls predict a close race with Molinaro prevailing. An early August, a DCCC survey put him ahead of Ryan by 46 percent to 43 percent. Other early summer polls had Molinaro with far larger leads.

Molinaro was elected to Village of Tivoli Board of Trustees in 1995 when he was 18 years old. He subsequently ran for mayor at 19 and won, making him the nation’s youngest mayor at the time.

Molinaro served in the Dutchess County Legislature and in the state Assembly before being elected Dutchess County Executive in 2012. He was reelected in 2016 and again in 2020 after losing the 2018 gubernatorial election to incumbent Democrat Gov. Andrew Cuomo.

As with Ryan, Molinaro emphasizes his local government experience as an asset that will make him effective representing the upper Hudson Valley and central New York areas in Congress.

Molinaro has tried to assure pro-abortion voters that overturning Roe v. Wade does not change New York’s “settled law” on abortion, and said that while he opposes “late-term abortion,” he would not support a federal ban if a Republican-controlled Congress was to propose such a measure.

He also frames gun control as a mental health issue, maintaining that access to mental health care is a “crisis across the country” and advocates for requiring public and private insurance to cover “meaningful mental health services” with increased reimbursement rates.

During the 2018 gubernatorial race, Molinaro acknowledged he did not vote for then-President Donald Trump in 2016.

He has since been supportive of the former president, and been endorsed by his key allies, including Rep. Elise Stefanik (R-NY), but does not feature Trump prominently in campaign literature and while stumping.

Ryan, an Iraq war veteran and 2004 West Point graduate, was elected Ulster County executive in 2019. He was defeated by Delgado in a seven-way CD 19 primary in 2018.

As with Molinaro, Ryan touts his record as county executive in his campaign literature, claiming successes in improving “housing, protecting our environment, and keeping our community affordable.”

He vows to bring “common-sense solutions” to Washington as an outsider and veteran.

“We’ve got plenty of career politicians and political insiders in Washington; what we need more of are leaders who’ve actually laid it on the line for our country—served in combat, built a business, united people during tough times,” Ryan said.

The upcoming Democratic primary is for the current 19th District, although the new lines adopted last month put Ryan’s Gardiner home in the redrawn 18th District.

Molinaro has been pounding away at his Democratic opponent over inflation and crime.

“Next Tuesday,” Molinaro said in an Aug. 17 Twitter post, “we have a special election, and we need to send Joe Biden a message and defeat his handpicked candidate Pat Ryan. When I’m in Congress, I will hold Biden accountable and work on solutions that will reduce inflation and lower gas prices.”

The Ryan campaign with a “Sad Truth” DCCC-funded ad continues to claim Molinaro would support a nationwide abortion ban despite his statements stating he would not.

“Marc Molinaro and the Republicans are too extreme on women’s rights,” the ad states.

Molinaro will only face Ryan in the special election. In November, he is likely to face, and will be favored to defeat, attorney Josh Riley, who is projected to win his CD 19 Democratic primary against business owner Jamie Cheney.

Even should Ryan win the Aug. 23 CD 19 special election against Molinaro, he is the heavy favorite to be campaigning against state Assemblyman Colin Schmitt (R-New Windsor) in the CD 18 November general election.